Fathoms: The World in the Whale 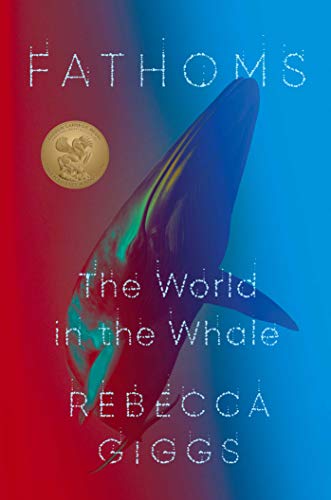 “From whale song to whalefall, Giggs’ science writing is deeply researched and as fascinating as the whales themselves . . .”

Fathoms: The World in the Whale begins with a humpback whale stranded and slowly dying on an Australian beach with no way for humans to save it. Author Rebecca Giggs’ encounter with the suffering animal launches a journey to understand the past, present, and future dangers to whales, which means that Fathoms is arguably as much about human nature as it is about cetaceans.

Fathoms shows whales to be what humans have long suspected: not just enormous but enormously complex, with lives and capacities that made them masters of the seas. Until we showed up.

What Giggs accurately calls the “globalized, zoological disaster” of whaling occurred across eras and oceans. Giggs’ analysis of the number of whales killed—estimated at three million just between 1900 and 1999, which was more than in all previous centuries of known whaling—and how whales’ butchered bodies became the foundation for myriad human inventions, from corsets to police batons, pharmaceuticals to munitions to satellite mechanisms, sparks questions about what it means to be human. The inevitable answers are not admirable.

“Whales were how the Western environmental movements first learned to tell a story as big as the world,” writes Giggs, but it’s not possible to save a species without saving its habitat, which is a fancy word for the part of the world a species shares with us. The next campaigns to save the whales will be in our neighborhoods, homes, and daily lives.

Mundane items transform the ocean into deadly seas. Plastic bags and disposable cigarette lighters are found in the bellies of dead Byrde’s whales. Tracksuits, golf balls, surgical gloves, and plastic sheeting are found in the bellies of dead grey whales. An entire greenhouse, complete with tarps and flowerpots, as well as part of a mattress and other consumer goods, was found in a sperm whale washed up along the coast of Spain. PCBs washed out to the ocean through stormwater enter the food chain and eventually become stored in the highly toxified bodies of killer whales, while air pollution brings carcinogens such as cadmium and chromium into whales’ enormous lungs.

From whale song to whalefall, Giggs’ science writing is deeply researched and as fascinating as the whales themselves, and Fathoms’ bibliography is extensive.

We learn how commercial whaling disrupted oceanic food chains and how restoring cetaceans may help mitigate climate change, how our monstrous history of whaling may have given rise to 19th century stories of sea monsters, and how the mysterious keening called “52 Blue” might belong to one or more unidentified species of cetaceans.

Giggs is often lyrical, as when she says, “What was lost, if you took the time to think about it, was the timelessness the sea had always stood for.” Unfortunately, she’s just as often nonsensical, as when she writes, “Death notwithstanding, it seemed charged with capricious wattage—an ultramarine temperament.”

Giggs’ wearying personal musings, combined with far too many “empurpling driveways” and “sops of faceless things,” make for a dreary read, although some readers might be pleased to discover research on whale worms compared to “haruspex seeking divinations of the future” or to learn that “The queue is the agar of conspiracy.”

Giggs’ verbosity distracts from the importance of what she’s learned: “A whale is a wonder not because it is the world’s biggest animal, but because it augments our moral capacity. A whale shows us it is possible to care for that which lies outside our immediate sphere of action, but within our sphere of influence—we care deeply, you and I, about the whale because it is distant. Because it speaks to us of places we will not go. Because it magnifies the reach of our humanity and reminds us of our collective ability to control ourselves, and of our part in a planetary ecology.”

Giggs ends Fathoms much where she began with people gathered to view yet another dead whale. Her pessimism is realistic, but her calls for hope are hollow. Fathoms’ unredeemable flaw is that it pays scant attention to the many local, national, and international efforts to save not just whales but our marine environment, some successful, some not, some with lessons yet to be learned, from the creation of marine sanctuaries and stranding rescue networks, to activism to ban plastic bags, end toxics in consumer items, or remove dams, to name a few. Readers and whales deserve a larger story than the one Fathoms gives.