My Father's Wake: How the Irish Teach Us to Live, Love, and Die 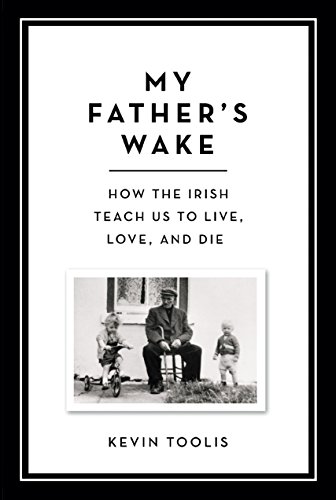 “The boundaries which divide Life from Death are at best shadowy and vague. Who shall say where the one ends, and where the other begins?” Edgar Allan Poe

In American culture, death and mortality are often seen as taboo subjects because no one really likes to think about them. However, death comes in many pretexts. Whether we rage against the dying of the light or eagerly embrace the darkness, we must all find our own way.

“Death is a universal occurrence with two options; you can do death well or you can do death badly. You can encounter your own death and the death of those you love in terror, in denial, in confusion, in blind panic, in shocked surprise and in despair . . . Or you could try the other option and learn how to die.”

Talking about death in our society makes most people incredibly uncomfortable. They do not speak very openly or in much detail about it. Rather they allude to it, avoiding tackling the subject directly. Americans do not die. They “pass away, “expire,” “kick the bucket,” “go to their reward,” “breathe their last,” “cash in their chips,” “meet their maker,” “depart this life,” “give up the ghost,” or other avoidances. Insurance companies advertise plans designed to meet “your final expenses.”

Once death arrives, its victims are not “dead.” Instead, they are “loved ones,” “the departed,” “the deceased,” the “late so and so.” Rather than being buried, the dead are “laid to rest” or “sent to their reward.” Those about to die are “terminally ill.”

Throughout most of American history, death, sometimes by violence and often by sudden disease, was an everyday experience. Today it is remote. People no longer die at home, but in nursing homes, hospitals, or hospices. When they die, they do so within a cultural structure that may not include close, supportive families or ingrained cultural rituals for acceptance of death and grieving.

At the same time, a deep sensibility of optimism and hope has always been a part of the American psyche. Death in the American mind is something for the distant future, and we hope they invent a cure before we get to that place.

The Irish, however, have a very different relationship to death. Generally speaking, the Irish people are known for being gregarious and polite, with a belief in good luck, and uplifting spirits, especially when it comes to enjoying good partying. The most well known is the Irish Wake.

During a person’s final moments, families gather at the foot of the bed to sing the Five Sorrowful Mysteries of the Rosary, a lullaby to cradle their loved ones into death. Surrounded by those who know them best and care about them most, the dying come rest.

And then the living’s responsibilities begin in earnest. Upon death, men dig the deceased person’s grave by hand, a sign of dedication and a labor of love. Every male family member then gathers together to carry their loved one’s coffin on their shoulders to the grave, while others stand outside the deceased person’s home as the coffin is carried out the front door and placed onto two household chairs on the lawn.

The walls of the house are splashed with Holy Water. Then the coffin is lifted into the hearse and the chairs are kicked over to mark an irreversible rupture between the living and the dead. Such is the Irish way of death. If you’ve only seen the movie version, you might think it’s just another occasion for social drinking. You’d be wrong.

In My Father’s Wake: How the Irish Teach Us to Live, Love, and Die, Kevin Toolis examines death from an Irish perspective. Toolis simply clarifies that death and funerals in Ireland are seen as a social responsibility and communal act of kinship. An Irish born writer and BAFTA- winning film maker, Toolis is the critically acclaimed author of Rebel Hearts: Journeys within the IRA's Soul (1996, St. Martin Press) which has been featured in the New York Times Magazine and the Guardian.

“Death is a whisper in the Anglo-Saxon world . . . We have pulled the curtains across, privatized our mortality . . . Officially the deceased have become obscene.” But on a remote island off the coast of Ireland's County Mayo, death has a louder voice. Along with reports of incoming Atlantic storms, the local radio runs a daily roll of ordinary deaths. And the islanders go in great numbers, often with young children, to be with their dead. They keep the corpse and the bereaved company through the long hours of the night. They dig the grave with their own hands. It is a communal triumph in overcoming the death of the individual.

In this stimulating and poignant narrative, Kevin Toolis armed with his Irish heritage gives a heart wrenching description of the death and wake of his father as he delves into the broader history, rituals, and meaning of the Irish wake.

“Sonny was a very ordinary man and his life passed unnoticed by a wider world. But Sonny did have one advantage over most of us: he knew how to die. And he knew how to do that because his fathers and mothers on the island, wake after wake, had shown him how. They had trained Sonny all his life to die by giving a voice, a place, in their daily lives for the dying and the dead. And in showing Sonny how to die, those Irish fathers and mothers taught him other more important lessons. How to live. And how to love.”

With an inspiring and refreshing message at its core, My Father's Wake rejoices in the spiritual depth of the Irish views on mortality. But do not be mistaken, this book’s purpose is not to solve the meaning of life, but it does ask some very challenging questions. Thinking about our own death does inescapably return to the existential questions: Is this the life I wanted? Or still want? Can we learn to deal with mortality and death in a better way—by living and loving as the Irish do.