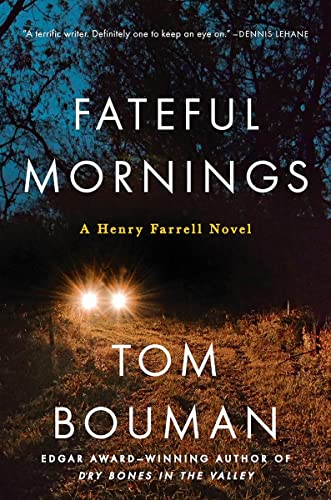 “We can only hope that Bouman has enough creative capital . . . to produce a better effort next time around.”

Henry Farrell is a one-person police force in the rural community of Wild Thyme, Pennsylvania. He has a low-key approach to law enforcement because, as he explains in the opening pages of Fateful Mornings, “as a policeman in a small township, it is a fine line between making yourself useful and paining the community’s ass.” As a result, he spends most of his time playing the fiddle with friends, hunting wild turkey, and sneaking through the woods to carry on an affair with the wife of a neighbor.

When a burglary at a lakeside cottage coincides with the suspicious disappearance of a woman named Penny Pellings, however, Henry finds himself drawn into a deepening mystery when Penny’s boyfriend, Kevin O’Keeffe, mentions during an alcoholic misadventure that he may have shot someone. He babbles about blood, Penny’s hair pulled out and left on the floor, and the bathroom door kicked in.

Henry drives out to take a look inside their trailer. He finds signs of scrubbing, a bathroom door that may or may not be a replacement, and no hair. Looking more closely, however, he discovers a drop of blood on the kitchen floor near the refrigerator. He cuts out the piece of linoleum, bags it, and sets off to find out what happened to Penny Pellings.

The problem with second novels is that they’re often more difficult to write than the first one. Tom Bouman’s debut publication, Dry Bones in the Valley, was a worthy recipient of the Edgar Award for best first novel. One can only imagine the time and effort that must have gone into the completion of this first manuscript, the creative capital expended while shaping Henry’s character, working out the kinks in the story, getting the literary tone just right, and capturing the essence of rural Pennsylvania. The result was a success, without a doubt. A book worth reading.

Having pledged a series featuring our man Henry, however, Bouman was then required to produce a sequel. This is where the difficulty often arises, and unfortunately Fateful Mornings fails to measure up to the high-water mark Bouman set for himself with the first one.

A missing person story with a strong suspicion of murder, his second novel immediately stalls out of the gate and goes no further. Henry wanders around northeastern Pennsylvania and upstate New York following threads so tenuous they’re difficult to make sense of, stumbling into rough and unpleasant situations that seem pointless other than to earn the rural noir tag bestowed upon Bouman’s writing with Dry Bones. All the while, Penny’s corpus delicti continues to elude.

Perhaps even more disappointing than an uneventful plot, though, is the discovery that Henry is not the same compelling, intriguing protagonist we all remember.

Bouman plays the same riffs, including Henry’s deeply thoughtful absorption with music, the brooding emptiness in his soul once occupied by his late wife, and the measured, almost reluctant, approach to law enforcement, but they just don’t seem to have the same snap and bite in Fateful Mornings that they did in Dry Bones.

Readers coming to Tom Bouman’s work first with Fateful Mornings may not bother to read any more of his crime fiction, which is a shame, because Dry Bones in the Valley is definitely worth their time. This one is a disappointment, however.

We can only hope that Bouman has enough creative capital squirreled away somewhere out there in northeastern Pennsylvania to produce a better effort next time around.