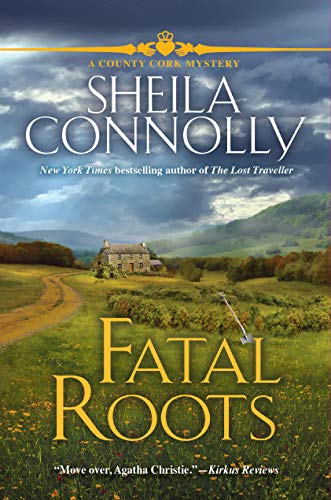 Sheila Connolly has been a busy writer, cranking out five series since 2008, along with novels and short stories. This new book is volume 8 in her County Cork Mysteries.

Here Boston-bred Maura Donovan continues the life change begun in earlier volumes, in which she inherited a house and business in Ireland. Since nothing was holding her back home, she stayed in the new country and adopted the rural lifestyle of her little village of Leap.

Yet before she’s fully settled—still not knowing the boundaries of her own land, or how to run a pub, or anything about the person she inherited from—a university student wakes her up one morning, wanting to explore the “fairy fort” on her property.

Fairy forts, also known as raths, are ancient circular ruins whose purpose isn’t fully understood. The student claims to be cataloging raths around Ireland as part of a research project, and first on her list is Maura’s fairy fort.

Maura can see no reason to refuse, and besides, she’s curious. Following the students (more soon arrive) around the rath is a good way to learn about her land as well as the history and lore of her new country.

You can probably guess what happens: They find a body in the rath. And then one of the students disappears. When Maura probes for information from the locals, they turn secretive and emphasize the dangerous tales about fairy forts. Although naturally skeptical, Maura is nervous enough to wonder how much truth lies behind the legends.

Then her mother swoops in and introduces Maura’s teenage half-sister. The mother abandoned Maura as a child back in Boston, more than 20 years earlier, and they only just reunited in the previous volume. Their relationship is still unsettled—and the half-sister didn’t know Maura existed until being dragged along to Ireland, where her mother is involved in reviving a hotel.

The combined events leave Maura with a lot of disconnected, unnerving pieces on her plate, complicated by her kinda-sorta-maybe romance with Mick who helps at the pub. Even the pub offers no comfort, as its kitchen is under renovation and business is disturbingly slow.

Meanwhile, the friendly police can’t find out anything about the skeleton found in the fairy fort, aside from the fact it is far younger than the ruins. In fact, it’s just a few decades old, and the man clearly was murdered. He was likely known by the community, who have collectively zipped their lips.

All Maura can do is keep asking questions. In the process, readers learn about life in small Irish communities, whose unwritten history lives on in local memory. It seems to Maura that “any time anything happened, it was like scraping off the present to see pieces of the past. And the past wasn’t too far below the surface, only most of the time she didn’t recognize it at all, even though most people she knew here did.”

The author does a good job blending the background of the mystery with Maura’s background. Readers don’t have to read all preceding volumes to understand where Maura’s head is at in this book and how she got there. That allows the story to move forward . . . albeit slowly.

Most scenes involve personal interactions and Maura’s personal reflections. These make for an almost too-cozy mystery instead of a lively one. A heavier-handed edit could have perked it up by removing information repeated multiple times while Maura sorts out her role in things.

That role proves to be a complex one involving the past and present of all the key players. Answers come when the elder locals finally unzip their lips. Thus Maura’s “fatal roots” are exposed and explained, closing another episode in her continuing adventures.

It also provides good closure for the series, should the author choose to end here. She has already launched another one. Her previous series have run half dozen to a dozen volumes each, putting the County Cork Mysteries around the average limit. Then again, this prolific author produces more than one book a year, so we’ll likely see Maura again along with her fellow heroines in the Orchard Mysteries, the Museum Mysteries, the Relatively Dead Mysteries, and the Victorian Village Mysteries. Plenty for cozy lovers to enjoy!