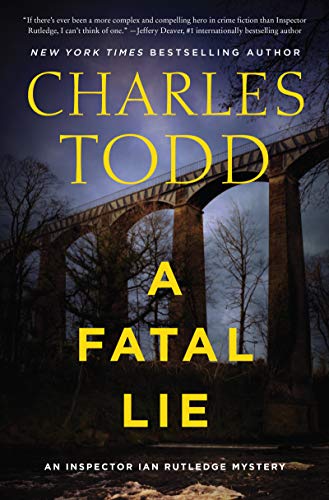 “Those who value similar portrayals of place as character—as in Louise Penny’s Three Pines, for instance—will treasure A Fatal Lie and its Welsh backdrop.”

Scotland Yard inspector Ian Rutledge can never be quite sure whether his own employment will endure through the investigation of his next case; Chief Superintendent Markham can’t stand him, and only Rutledge’s quick success on behalf of powerful political connections has ever been enough to guarantee his job from one day to the next.

In A Fatal Lie, Markham takes advantage of a help request from a northern Welsh county to send Rutledge out into a raw, bleak location—which, come to think of it, isn’t much worse than sitting in the office exposed to his superior’s malicious dislike of him. Moreover, Rutledge is by nature determined to find criminals and see justice done. In his private life, he is still struggling to make amends for events in his Great War service, which have resulted in his mind being haunted by the voice of Corporal Hamish MacLeod.

“Hamish was saying, ‘Ye ken, the Yard doubts ye. Else, they’d not send ye to Wales for a drowning.’

‘Aye, ye can try to ignore the signs. But ye’ve seen the for yersel’.’

Hamish was trying to goad him into a quarrel, but it was only a reflection of his own troubled mind.

Setting his teeth, he concentrated on the road ahead.”

Though the drowned man has no easy identification, and the community around the drowning refuses to assist Rutledge’s investigation, he’s quick to realize that the body is that of a member of the Bantams, a wartime service unit of very short men, like the Welsh with their poverty. And it turns out easy enough to be sure the victim is Sam Milford.

But then it’s as if Rutledge has tumbled down a rabbit hole of people’s mixed motivations: a solicitor who deliberately steers him wrong, a new widow misleading him, dangerous individuals willing to extend their self-protection to threatening Rutledge himself.

The new widow, Mrs. Milford, may be the most difficult to understand.

He wondered if she’d even heard his questions.”

Some of the plot here turns on what different people mean by “lost,” as well as on what Rutledge can find, as he dodges the malice aimed toward him from London. Even more of it swirls through the disturbing waters of twisted love and dark motives that in some ways, Rutledge is too kind a person to grasp.

And when he does begin to understand the complicated motives in place, he’s already in danger himself—being hunted by the killer.

Ardent readers of this Charles Todd series (one of a pair by the mother-and-son author team) may regret that Hamish’s abrupt and caustic voice, so quick to warn Rutledge of danger, is not especially present in A Fatal Lie. Nor are the other aspects of this investigator’s own grief-stricken life: the betrayals in love, the desperate need for honest friendship, the sense of being forever lost in a peacetime that doesn’t grasp and won’t admit what he’s endured and how the war has broken him.

Yet for that very reason, A Fatal Lie provides an excellent book with which to walk into Rutledge’s pursuit of crime and determination to make things right. It also gives a haunting introduction to the perils and fierce protectiveness of Welsh culture, a setting in which long-term vindictiveness can flourish and persist, if Rutledge fails to grasp the forces in play and the motives that may stem as much from love as from malice.

Those who value similar portrayals of place as character—as in Louise Penny’s Three Pines, for instance—will treasure A Fatal Lie and its Welsh backdrop. As a police procedural, also, the book’s persistent untangling of motive, means, and opportunity provides an instant classic for this mystery genre, along with an intriguing exploration of the heart’s effects on the mind.