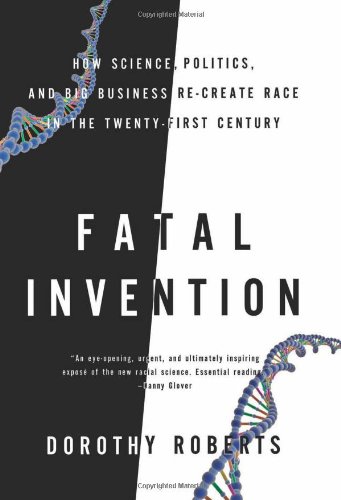 “This is the best book of the year. . . . If you read one work of nonfiction a year, make this the one.”

So pervasive is race in the way we think about the world, it will be difficult for many readers to accept Dorothy Roberts’ argument that there is absolutely no biological basis for the social and political concept of race. With the mapping of the human genome, many thought that we would discover some scientific basis for the way we tend to identify both ourselves and others.

It turns out that humankind is one race, and we are not naturally divided. Scientists have looked for clusters of alleles (which express traits), single nucleotide polymorphisms (SNPs), and any other statistically significant genetic material that might align with our social and political notions of race. There are none.

A decade ago, studies of haplogroups (mutations on the Y chromosome or mitochondrial DNA, which are only passed down through mothers or fathers) enabled books such as The Seven Daughters of Eve, which traced human migrations from Africa to Europe. It seemed to confirm the myth that our ancestry has helped to determine our race. In fact, nothing could be further from the truth.

When Homo sapiens migrated from Africa to Europe (some 70,000 years ago) they intermarried enough to share some common phenotypes—white skin being among them. Does this make a race? Apparently not.

As a species, Homo sapiens is more homogenous (there is less genetic variation) than in a typical wild population of chimpanzees. And in the place where we all began, Africa, populations in Congo, Ethiopia, and South Africa are more different from each other than each is from the population in northern Europe.

It may be possible to identify groups that lack epicanthal folds, or lack skin pigmentation, but there is no statistically significant boundary to these populations, and physical traits do not merit generalization about anything else.

Recently home genetic testing kits have been marketed to (self-identified) African Americans, with the lure of discovering from their haplotypes where in Africa they came from. The sampling of global haplotypes is progressing quickly, but it is still very incomplete, and the algorithms that most companies use are not updated. We do not know with any certainty where most haplotypes originated.

So if there is no such thing as race, and if ancestry is, in an increasingly intermixed world, no longer relevant, how is it that we identify people as African American or Hispanic or white? This is where Ms. Roberts, a professor of law at Northwestern, makes the most interesting and powerful contribution to our understanding. She argues that race is entirely a political construct, and our “post-racial” era is characterized by racial brutality.

As a political construct, race has very real consequences, and Ms. Roberts leads us through some of those consequences in the field of medicine. Doctors are trained to observe the race of a patient, and may misdiagnose because of this training. Cystic fibrosis is supposed to be a “white” disease, which means that the African Americans who have it (and a significant minority do) go undiagnosed and untreated.

Sickle cell anemia is supposed to be a black disease. It helps people who live in areas with malaria live to the age they can reproduce, but then causes early death. But sickle cell disease is found across the globe in areas with malaria, in Europe, Oceania, India, and the Middle East. The town of Orchomenos in Greece has double the rate of sickle cell disease as among African Americans.

Though there are no racial diseases, groups who are identified and/or self-identify in racial terms have drastically divergent health. If African Americans had the same life expectancy as whites, 100,000 fewer blacks would die each year in the United States.

Roberts estimates that in Chicago, a highly segregated city with very differentiated access to health care, 1 in 3 black deaths would have been prevented if blacks had the same life expectancy as whites. And outside of the U.S., grouping Africans into race has fatal effects.

The HIV medication Abacavir has fatal side effects in parts of the white population in the U.S., and higher rates among African Americans. Aid agencies have taken this into account in deciding whether to provide this effective treatment to Africans. But the allele that predicts severe reactions to the HIV-drug Abacavir is found in 13.6 percent of Kenyan Masai, 3.3 percent of Kenyan Luhya, and 0 percent among the Yoruba in Nigeria.

Falsely treating Africans as if they were a race has drastic consequences. And in post-racial America the political effects of race can be fatal.

This has been exacerbated by FDA approval of race-based research. Although there is greater genetic diversity among Africans than non-Africans, the FDA in 2005 approved a drug for hypertension in African Americans. BiDil was a combination of medicines that no longer had patent protection, and by showing that they had a specific effect on African Americans, a drug company hoped to make big profits.

There was supposedly a biological difference that made African Americans more susceptible to hypertension, but it was debunked by the time the FDA approved the drug. In many of the studies that purported to show a racial difference, testing was on people who physicians identified as African American. There was no scientific basis for specifying the population, or the control populations to which it was compared.

And it turns out that there has been literature since the late 1960s showing why African Americans have a disproportionate rate of hypertension. People who are subjected to racism for their entire lives develop high blood pressure. The cure is definitely not for the federal government to sanction race as a biological concept.

Ms. Roberts argues convincingly and clearly, explaining concepts from genetic research, law, and the social sciences with clarity for the general public. Her tone is at times strident, but her topic merits it. As she points out, the New York Times has covered many genetic discoveries, but the absence of convincing evidence for a biological basis for race is not among its articles.

Ms. Roberts rightly criticizes the FDA and geneticists for unstated or unscientific definitions of race as an independent variable. Perhaps it is more important for natural scientists than for social scientists to be rigorous in making their methods explicit.

But after chapters of showing us that race is a social and political construct without any biological basis, we read statements like “Black men are eight times as likely as white men to be behind bars.” And if we have learned our lesson from the author, it is not clear what, exactly, black or white means.

Fatal Invention is carefully footnoted. Some indication of how race is defined in these statistically based arguments would not place an onerous burden on the 54-page reduced-font endnote section.

In such an important work, it will be possible to find much to criticize. It is a testimony to Dorothy Roberts’ comprehensiveness that we can read the work and attempt to draw our own conclusions.

This is the best book of the year. Its argument has already been used in at least one graduate course, and it will be a topic of common conversation—as it deserves to be. If you read one work of nonfiction a year, make this the one.