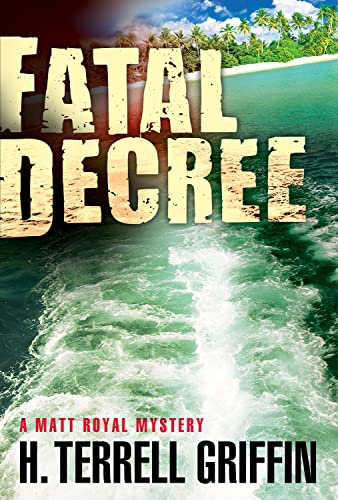 “If you haven’t read any of the Matt Royal series yet, you’re in for a treat.”

When a serial killer shows up on Longboat Key, Florida, after a 12-year absence, Royal is stymied. The first woman killed on Longboat Key has ties to a secretive government agency for which Royal’s best friend Jock Algren works. Was this a coincidence or was she a targeted kill?

Royal’s friend, Longboat Key detective, Jennifer Diane (J. D.) Duncan, investigates and quickly discovers that the latest victim was killed similarly to victims from over a decade ago in Miami, raising the possibility that perhaps a serial-killer is on the loose, or at the very least, a copycat.

Eventually, Royal gets a visitor seeking help on the case.

“My doorbell rang. I looked at my watch. Ten o’clock. I was wearing cargo shorts, a T-shirt with the logo of an island restaurant long out of business, and boat shoes. I opened the door to find a beautiful woman standing on the stoop.

She was about five seven, and this morning her should-length hair was fashioned in a ponytail. She was slender, her body honed by years of regular workouts. Her face was a bit pale, her green eyes troubled, and tension lines were etched around her mouth.

She was the Longboat Key police department’s only detective, and she was my friend. She wore a pair of jeans, a golf shirt, and running shoes. ‘Come in, J.D., I said. Are you okay?’

She came through the door, looked at me, and said one word. ‘Coffee.’
‘Coming up. Sit down. I’ll be right back.’

Jennifer Diane Duncan, known as J. D., had come to our key a year before. Her mom had lived among us for the last several years of her life, and when she died, J.D. inherited her condo.

J. D. was in her late thirties and had joined Miami-Dade Police Department after receiving a degree in Criminal Justice from Florida International University. She’d risen quickly through the ranks and after a couple of years as patrol officer, became the youngest detective on the force. She worked in the fraud division for a while and then moved to homicide where she eventually became the assistant commander of the unit.

When her mom died, J. D. saw an opportunity to leave the streets and danger of the big city and move to Longboat Key. Bill Lester, the chief of police on the key, had jumped at the chance to hire her as Longboat’s only detective. She had moved into her mom’s condo, and quickly became a part of our island community. So far, our relationship hadn’t moved beyond the friendship stage, and maybe it never would. But a guy can hope, can’t he?

I returned from the kitchen with two mugs of black coffee, and handed one to her. I didn’t say anything. She was obviously troubled, and I knew her well enough to know she would tell me what she thought I needed to know. I took a seat next to her on the sofa. I waited.

The latest killing has brought back repressed memories for Duncan from years ago when she worked for Miami Police Department as a young detective, hunting the serial killer of three women. Each of the women had been shot in the back of the head with a twenty-two-caliber pistol before being pinioned to trees. Eventually the murders would be dubbed the Whale Tail Killings by the press because of the killer’s method of pinning a silver whale tail earring through each of his victims’ left earlobe, postmortem.

But if this really is the Whale Tail killer, where has he been for the past twelve years? And why has he come to Longboat Key when his earlier kills were all in Miami?

The mystery deepens when Guatemalan gangbangers try to kill Royal and Duncan and suspicions grow that Mexican drug cartels are somehow involved.

Fatal Decree is an action packed, relentlessly paced thriller with the added bonus of authentic sounding characters mixing with the sounds and smells of southwest Florida.

If you haven’t read any of the Matt Royal series yet, you’re in for a treat.