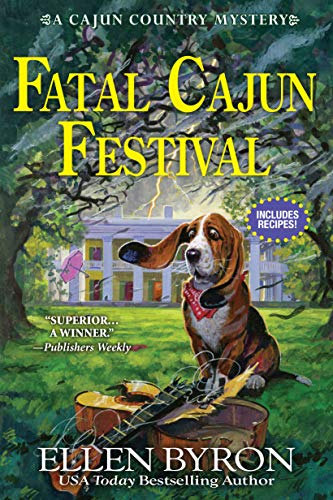 “a lip-smacking light mystery flavored with lovable characters and Southern charm that readers of cozies will devour along with the scrumptious recipes included at the end.”

Pull up a chair and enjoy a tantalizing gumbo of the Crozat clan's Louisiana family and friends. Author Ellen Byron has thoughtfully included a two-page cast of characters list so readers can keep them all straight. They'll need it. More than 26 of them appear in this story!

And there are recipes, too! More on that later.

Rather than buckle under the cost of maintaining their majestic, centuries’ old plantation and losing it to time and age, the Crozat family chooses to turn it into the Plantation Bed & Breakfast in the small town of Pelican, Louisiana. Maggie, along with her parents and grandmother, run the place, providing an authentic Cajun experience for tourists and guests:

"They reached the back door of the Crozat manor house. With its thirty-two square columns and galleries encircling the home on both the ground and second floors, Maggie's family home was a gracious example of Greek Revival architecture and a landmark on Louisiana's Great River Road. . . ."

And there is big news! The whole place has been booked by a band performing at Cajun Country Live!, a local music festival. Tammy Barker, a Pelican native who made the big time, is returning home as lead singer and headliner. Maggie and the Crozat family are in a frenzy of anticipation and preparation for the arrival of Tammy and the band. Everyone knows how much fun it is to hang with musicians!

Usually, but not this time.

The band is in turmoil. Country music star Tammy is a passive-aggressive bully with special food requirements; her manager Pony Pickner is a dismissive blowhard who can't keep his hands off the girls; her personal assistant Sara is sparring with Pony for access to and control of Tammy; and the backup singer is bitter and jealous, on the verge of quitting. All that plus jaded bandmates, one of whom is deaf.

Even so, everyone in town is excited to have their famous native return to perform for them. Only old school chum Gaynell Bourgeois has misgivings. Gaynell and Tammy went to high school together, and Gaynell remembers that Tammy was a snarky diva even back then:

"'. . . Tammy was a junior when I was a freshman. . . . We were both into music. I've never been that competitive, but she was . . . She was one of the cool kids, so she could get people to not sit with me or believe rumors she started. During a school talent show, when it was my turn, she got up and walked out. A ton of kids followed her'. . ."

The festival opens, and Tammy and the band take the stage to rousing cheers from the audience:

"Tammy pulled the mic from its stand and launched into her biggest hit . . . and followed it with several more songs off her debut album. . . . Tammy rocked the stage in her Daisy Dukes, tight tee, and high-heeled, sparkly cowboy boots. She wore her hair in a loose braid that swung back and forth as she shimmied and body-rolled. . . ."

Toward the end of the performance, Maggie and Gaynell are aghast when Tammy breaks out into song, a song that Gaynell wrote and was going to sing. Tammy claims that she was doing Gaynell a favor by showcasing the song in her act.

Later on, Pony Pickner is electrocuted by a malfunctioning sound system. Tammy points the finger at her old schoolmate, claiming Gaynell rigged the sound system in retaliation for Pony making uninvited, unwanted advances:

Then an incriminating video turns up—Gaynell making another threat!

While the police investigate, Maggie decides to do a little sleuthing of her own and pretends to be a groupie in order to get closer to Tammy and the band. She thinks if she hangs around acting star-struck like the other groupies, she'll be able to do a little eavesdropping and learn something that will lead to the real killer.

What follows is a delightful romp among family, friends, groupies, fans, and hangers-on that ends in a satisfying conclusion.

Ellen Byron has written a lip-smacking light mystery flavored with lovable characters and Southern charm that readers of cozies will devour along with the scrumptious recipes included at the end: Cauliflower Jambalaya, Maple Bacon Pralines, and Rum Raisin Cake with Rum Frosting.