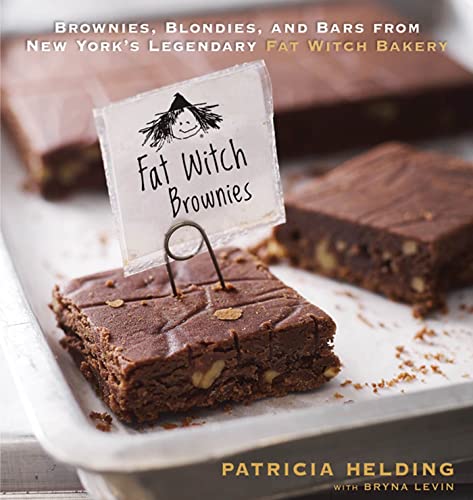 It’s tough to throw around descriptions such as “legendary,” and “arguably the very best to be found on the planet,” and live up to them with something as simple as a brownie. To do it, you need serious recipes with deep, rich flavors that, despite their simplicity, can’t fail and don’t dare disappoint.

The brownies sold at the Fat Witch bakery in New York may be “arguably the very best brownie to be found on the planet,” complete with an Oprah endorsement, but these recipes are unarguably not.

They are, rather, fine. Very little sets these apart from the millions of brownie recipes out there, and not much moves them from fine to immortal or world-renowned. They’re just . . . fine.

The bakery’s original brownie recipe, for Fat Witch Brownies, calls for 14 tablespoons of butter. Fat carries flavor, so you might not be put off by that amount of butter in a 9-inch-square pan. But the recipe calls for just ½ cup plus 2 tablespoons bittersweet chocolate chips (or 4 ounces unsweetened chocolate plus extra sugar). That leads to brownies with a fine, but far from amazing, flavor and texture, and certainly no depth of chocolate, even using author and bakery owner Patricia Helding’s recommended Ghirardelli’s bittersweet chocolate chips.

Like the basic brownies, all the recipes in the book make a 9-inch batch, and most have a short ingredient list (usually about 10 ingredients). Quality becomes even more important in recipes with only a few ingredients, but Helding doesn’t offer recommendations of brands of white chocolate or cocoa, despite the wide variation in quality there.

She also doesn’t provide weights for ingredients. Perhaps doing so would violate the “brownies are so simple” message of the book, but because she recommends using chocolate chips, weights would have been especially nice, as chips come in somewhat different sizes, and “1/2 cup plus 2 tablespoons” isn’t the easiest measurement to match.For serious bakers, some of the recipe instructions will also seem frustrating. What does “butter not yet to room temperature” mean? Although bakers may love the note that Helding can’t be bothered with skinning her hazelnuts, they’ll be frustrated by the next line of advice, to just rub them in a towel if you want the skins off; hazelnuts need toasting first to help release their skins.

Among the more unusual brownies, the whiskey brownies, tested with the suggested variation of bourbon, left tasters still wishing for a deeper chocolate flavor, as with so many of the brownies. These cakey brownies did get better with a little age on them, however (after two days or so, the bourbon came through better). Molasses brownies, on the other hand, will taste good only if you really, really love molasses. Tasters wished for more spices here to balance the molasses, which completely overwhelmed the optional chocolate chips (the only other chocolate in the recipe is an ounce of unsweetened chocolate, and the only other ingredients are butter, sugar, eggs, flour, salt and a mere ½ teaspoon of vanilla).

The glorious combination of chocolate and pumpkin gets used in “Pumpkin Plus” bars, and they taste as good as anything using this pair should—at least when you manage to get equal parts chocolate and pumpkin in each bar. This turns out to be trickier than it sounds. A bottom brownie layer should get covered in a pumpkin top that, the recipe says, the baker should pour evenly into the pan. The thick pumpkin mixture is far from pourable, however, and difficult to spread over the chocolate.

Espresso, peanut butter, and maple oat bars all fared better. The espresso brownies came out less cakey, with an intense coffee flavor. Peanut butter bars proved popular with children, and while not amazing, provided a strong enough peanut flavor that so many similar bars lack.

Surprisingly, one of the best bars sounded like one of the most basic. Maple oat bars, enhanced with a healthy dose of vanilla extract and walnuts, came out chewy, crunchy, and just shy of too sweet. Perfect for a quick breakfast with some fruit, these bars, like so many in the book, tasted better after they aged a day or two, and still tasted good a full week later.

For bakers in a hurry, bar cookies and brownies promise the most satisfying results for the least amount of work, and these recipes do keep the promise of quick work to produce a panful. For bakers not looking for the best ever, or to become a legend in their own time, the recipes truly will be fine. To go from fine to fabulous, unfortunately, means bakers must become recipe doctors.