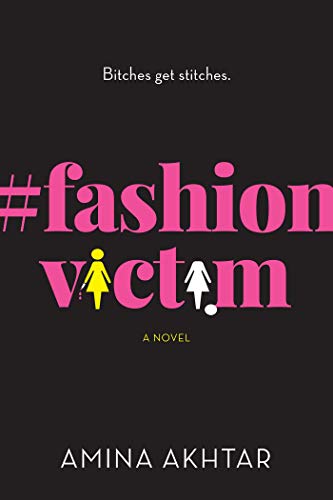 Anya St. Clair (not her real name) submitted a resume (fake) to get a job as a fashion editor at elite fashion magazine LaVie. Readers might not like Anya at first. She's fast talking, self-centered, and obsessive. Not to mention her pesky anger and impulse control issues. But when they get to know Anya's backstory, which comes pretty early on in the narrative so hang in there, they will understand her.

In fact, if Anya could crawl into Sarah's skin, she would: "I wanted hair like that. Long, cascading, blonde. My hair wasn't like that . . . Her eye makeup sparkled, her lips were ultra glossy. She wore Gucci boots, super tight leggings . . . I'd copied that look to a T."

When Anya's not at LaVie or fighting for a front row seat at some fashionista event, she spends much of her time making collages devoted to Sarah: "Besides vegging, I'd updated my mood boards over the weekend. One for me and a new one for Sarah. My latest mood board was just generic photos of people acting like friends. Girls linking arms, laughing while eating salads. Or walking on the beach. Except I cut off all the heads and replaced them with mine and Sarah's."

OMG! Can you even?

Sarah wins a promotion and becomes Anya's boss at the magazine. After an initial disappointment, Anya's fine with this, because it puts her in a closer working relationship with Sarah who she hopes will be her BFF. Anya has plans to make that happen sooner rather than later, so don't ignore her, slight her, or get in her way. Because if she starts hearing that buzzy sound in her ears, it doesn’t end well. Just ask the shy little intern, and the troll commenter on Anya's blog, and Sarah's real bestie . . . but never mind. No spoilers here. Keep reading and you'll find out.

The surprises arrive with the speed of a freight train, and readers won't see them coming until they're hit between the eyes. The first one might bring a guilty chuckle, maybe the second one, too. After that, the fun is in the anticipation.

This is author Amina Akhtar's first book, and she knows whereof she speaks. For 15 years she lived the life she writes about. As a former fashion writer and editor, she's worked for Vogue, Elle, and Style and has written for numerous other publications, as well.

There's lots of fashion industry name dropping here that might divert some readers to a Google search now and then. And be prepared for a fair amount of profanity. Some of the cool, chill dialogue might slow the reader down a bit unless they're in that highly competitive but glam NYC fashion world where smiles aren't smiles, but a baring of teeth.

But whatevs, Bestie, you'll obvi totes love this amaze book, so OMG let's go get a mani, then wing our eyeliner and take a selfie with this murderer in killer shoes.

#Fashionvictim is a book to not only buy, keep and read, but to inhale from page one. The sense of menace in the prologue will hook readers from the get-go, and Akhtar's sharp as a tack writing will carry you along this entertaining read to a stunning end, um, ending.