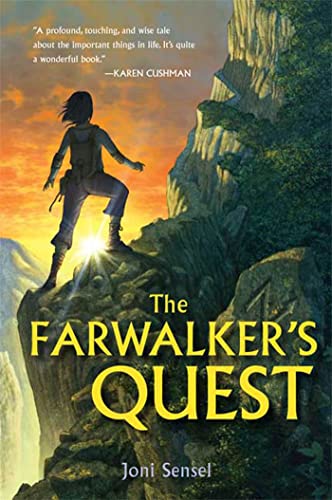 Bloomsbury USA Children’s Books, February 2010 “Zeke’s tree wouldn’t speak to him.” This is one of the most intriguing opening lines I’ve ever read. Yet The Farwalker’s Quest is not just about Zeke and the trees. Rather, Ariel is the key figure. She’s twelve years old, somewhat sturdy, and more than ready to engage in the forbidden sport of tree climbing. High in the boughs of Zeke’s tree, she finds a “telling dart” embedded in one of the branches. Ariel knows that a telling dart is an archaic way of sending a message. But how could a random dart in a tree be meant for her? Before long, it is clear she is being summoned. Two strangers arrive in the village, Arial is kidnapped, and her mother is murdered.  Arial eventually escapes, helped by her friend Zeke and later by Scarl, one of her captors. Meanwhile, the mystery of the dart drives the plot. Ariel is being sought by a dangerous person. Yet her own destiny—perhaps as a Farwalker—is linked to the discovery of the elusive and legendary Vault, which promises treasure for the people.  Like many fantasies, The Farwalker’s Quest is lengthy. But author Joni Sensel creates a compelling story.  Part of this is due to the setting. Although the quest appears to occur in a series of medieval villages, the story is post-apocalyptic. Aerial and the others are distant survivors of the Blind War, the force that nearly wiped out the Earth’s population. Sensel’s characters are also compelling. Arial isn’t a generic heroine. Rather, she is frank and occasionally funny with her opinions, whether she’s wondering about the intelligence of trees or the possibility that boulders—if not the earth—are gossiping about her.  The uncertainty of Ariel and Zeke as they follow their quest is also gripping. Even when they are discovering their roles as a Farwalker and Stone Singer, their path isn’t entirely clear. Even so, they keep on walking. Interestingly enough, Sensel dedicates the book to “all who wander.”  The Farwalker’s Quest ends with victory and the discovery of the Vault. But I’m a little confused about Arial’s final stature. As a Farwalker, she has begun to follow her calling —to connect people, carry hope, and craft the future. Yet at the very end of the book, she embraces Scarl as a father figure. With this act, she returns from her role as young woman to the role of a child. In other words, Arial seems to arrive in two different places. As a heroine, she finds victory and purpose. But as a child, she seeks refuge and protection. Contradictory? Not necessarily. In fact, this dual resolution may provide young readers with the most satisfaction.   In any case, The Farwalker’s Quest is a beautifully written story, full of insight, tension, and adventure. Sensel is also the author of Reality Leak, The Humming of Numbers, and the highly anticipated The Timekeeper’s Moon. Reviewer Jean L. S. Patrick is the author of several books for young readers, including The Girl Who Struck Out Babe Ruth. She has been the book columnist for the Mitchell (S.D.) Daily Republic since 1989.                         .