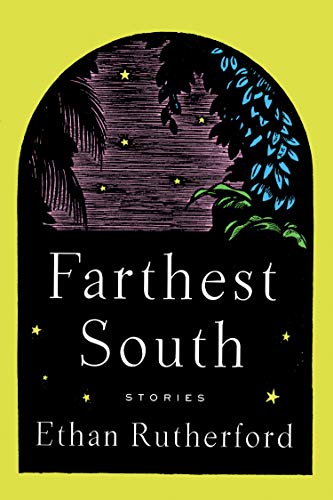 “Rutherford is especially good at describing the liminal space between reality and imagination, especially in the storyteller’s mind . . .”

In Farthest South, Ethan Rutherford takes readers into a magical world glimmering just beyond the world we think we know. Storytelling becomes both subject and method of these nine lapidary stories, which plumb ordinary experience for emotional depths by translating everyday life into fable.

The setting of the first and last tales is the bedroom of two boys, whose father Soren is telling them stories as he makes them up. That name and other allusions throughout the volume imply a Scandinavian setting. The dark woods and starlit nights of a cold climate haunt this volume.

The storyteller often comments on and interrupts his story, as if trying to make up the role of father, as well as the story, as he goes along. The mother is usually absent; only at the end of the volume does she speak to her husband. Tensions in the marriage, as well as the isolation of the family from other relatives and friends, focus attention squarely on the children.

The father’s stories echo those of other tales, from Grimm’s Fairy Tales to Beowulf, in seeking to provide a safe harbor for children against the twin, linked threats of parental abandonment and death. Sometimes the children reach that harbor, but not always.

Throughout the stories in this volume, as in many fairy tales, children are left on their own. For the most part, they thrive, learning to exhibit fearlessness and independence.

The last story, “The Diver,” is the most frightening, featuring a Grendel-like antagonist in the form of a giant squid, Old Gr’mer. The story begins with an apocalypse in which the world is flooded, and two brothers are left alone in it. A figure named the Diver becomes their savior against Old Gr’mer.

In the course of the story, the boys become heroes, as the line between the protagonists and the listeners is effaced. It is a story about death’s destruction of the body being overcome through dedication to life. That story has a satisfying resolution, as mysterious lights that appear in it are translated to the light of a cell phone, which the boys’ mother ignores in a rare moment of marital intimacy.

The theme of metamorphosis is evoked in “Fable,” in which a childless pair of foxes kidnap and raise a human child. “Angus and Annabel” is a Gothic tale in the vein of Poe and Hawthorne, with an ending as frightening as the ending of Shirley Jackson’s “The Lottery.”

The title story, “Farthest South,” is the most developed, featuring a polar expedition of children led by a grandfather and a talking penguin. This story conveys the perspective of age and the desire to keep exploring to the end of life. It includes some of Rutherford’s most beautiful imagery in his description of the Northern Lights: “As they watch, a curtain of light, green and blue, is drawn across the southern sky. It shimmers, and bends; it points to some larger mystery; it moves as though responding to music neither of them can hear.”

His depiction of the natural world throughout is spare and moving, especially the repeated images of birds. Natural scenes trouble several of the protagonists, though from an outside perspective they convey serenity: “The night was black. There was no moon. I could see some distant stars, and I watched as a few came unstuck and frizzled across the sky.”

“Farthest South” has the most resolved ending of the nine stories. In a few of the other stories, the ending is so unresolved that it is unsatisfying. As a result, those few stories seem to lack an explanation for the mysteries at their heart, though perhaps that is Rutherford’s point.

Most of his protagonists are male, from young boys through the grandfather of “Farthest South,” though “Pools, I Am a Hawk” provides a convincing perspective of a teenage girl. Adult women, though, are mostly absent or portrayed only as caregivers.

Rutherford is good at describing the liminal space between reality and imagination, especially in the storyteller’s mind: “I remember that loneliness was our night-creeper—that we were becoming wary of our own intentions and ability to follow through. I was at work on a book that I knew, via the secret door that led to the brain of my heart, would never come out.”

These stories might be even stronger if there were more of a connecting thread to them. Nonetheless, each may be enjoyed individually and resonate long after reading it. Rutherford opens a vein of mystery and magic in everyday life. He returns the reader to ordinary life with greater appreciation of the mystery and magic within and around us.