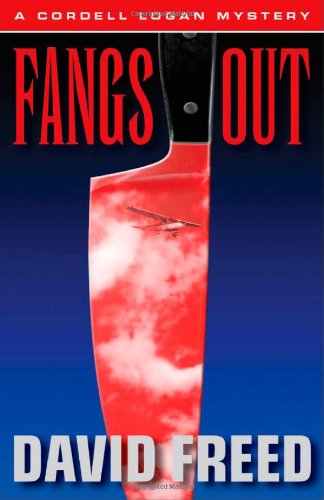 “David Freed is a master of mordant one liners for which Raymond Chandler’s leading man, Philip Marlowe, would have given his eye teeth.”

A Medal of Honor recipient married to Crissy, a former Playmate of the Year, Walker resides in the swanky San Diego enclave of La Jolla, overlooking the Pacific Ocean.

Logan is convinced that working for Walker will be little more than a paid vacation—a chance to rub shoulders with a living legend while rekindling Logan’s relationship with his own enticing ex-wife, Savannah.

But after flying to San Diego in his beloved aging Cessna, the Ruptured Duck, Logan is quickly drawn into a vexing and deadly jigsaw puzzle. The deeper he digs, the murkier the truth appears, and the more in danger he finds himself.

Who really killed the war hero’s daughter, and why? Somebody in “America’s Finest City,” wants to stop Logan from asking questions, and will stop at nothing to silence him. Unfortunately for them, Logan is not the silent type. . . .

The quixotic Logan may well be an aspiring follower of Buddhism, but sometimes he conveniently forgets its true meaning of peace, lovingkindness, and wisdom, trying his best to explain the paradox:

“The Buddha saw no viable purpose in lethal weapons. Which explains why he was the Buddha. I see firearms as tools, as practical as any saw or drill; they can come in quite handy when bad people need killing. This difference of opinion served to underscore how many of the Buddha’s precepts, in my flirtation with them, did not come naturally to my Western military mind. How does a man prone to violence by nature and training embrace a religion that preaches peace above all else?

“Kneeling there on the floor, my surgically reconstructed knee aching, I debated with myself before forcing the Buddha’s teachings down like medicine, the taste of which you hopefully get use to. I stuffed the revolver between my mattress and box spring, then drove to the airport.

“The Buddha, in this instance, had no idea what he was talking about.”

Told in the first-person, Fangs Out is the second book in the widely acclaimed Cordell Logan series, and like its predecessor is filled with bullet-speed wit, original characters (and a cat to die for), plus a fast-paced and intelligent plotline, climaxing with more than one surprise, especially the one on the very last sentence of the book concerning Savannah.

David Freed is a master of mordant one liners for which Raymond Chandler’s leading man, Philip Marlowe, would have given his eye teeth.