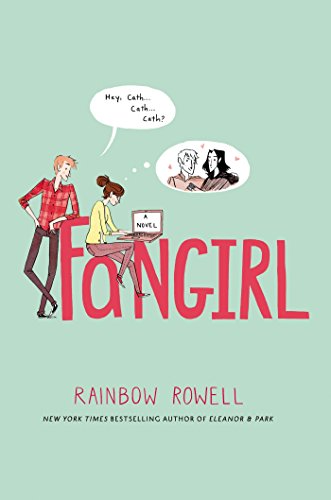 Fangirl, Rainbow Rowell’s YA followup to the bestselling and critically acclaimed Eleanor and Park may singlehandedly cause a spike in the consumption of whiskey by other authors of young adult fiction.

Not only has Ms. Rowell once again crafted an accomplished narrative filled with enviable humor and warmth. Fangirl also takes a big stand against the dangers of living too far inside of one’s private fictional universe. Aspiring authors everywhere take note—Ms. Rowell delivers a persuasive dialectic arguing that real life is worth it, even when taking new chances is scary.

Cath, just starting college, is a successful writer of fan fiction. Cath’s world is Simon Snow’s world. Her posters, her T-shirts, her free time is all about teen magician Simon Snow, and his fictional battles. With tens of thousands reading the fan fiction chapters she composes with her twin sister, Wren, Cath’s life is good.

Yet as the book opens, Cath moves from her comfortable home life into a nondescript dorm room at a Nebraska university. Unfortunately, her sister has opted for a different dorm, with a new roommate. And she’s ready to put aside the world of Simon Snow for college boys, parties, and a chipper roomie named Courtney.

Their father is several hours away. And when Cath’s high school boyfriend dumps her over the phone, all of Cath’s touchstones are broken, except for the seven books in the Simon Snow series, and her followers at FanFixx.net. It’s too hard to walk into the dining hall alone, or make small talk in the bathroom. So Cath retreats into her fictional world. Finding her way out again—and making connections with the living—is the real work of this novel.

And Cath’s transformation is accomplished in typical Rowell style—with humorous cultural references both sharp and observant (and often more sophisticated than the TV shows and books from whence they came.) “Were you watching me sleep?” Cath asks her roommate. “Yes, Bella.”

The riskiest aspect of the narrative is the heavy dollop of Simon Snow “excerpts” in the book. The many parallels between Simon Snow’s story and Harry Potter’s are both a blessing and a curse. The blessing is that Ms. Rowell draws upon that familiarity to keep her excerpts short.

The reader can picture their magical school, and feel the underlying hum of good versus evil. Unfortunately, comparing the two fictional universes becomes distracting, tempting the reader to pin down the similarities—the smart girl who sounds like Hermione, etc.

Also, the reader cannot help but feel overly conscious of how well the excerpts dovetail with Cath’s own experience. When Cath struggles to make up with Levi after a fight they’ve just had, the next page of Cath’s fanfixx.com entry begins, “‘Maybe fighting him isn’t the answer,’ Simon said.” In any good novel’s arc, the reader gets a first row seat as the protagonist learns her lessons.

Yet the way Cath is so quickly able to synthesize hers into literature sometimes feels a little too easy. Living authors everywhere will turn different shades of green as Cath proclaims, “sometimes writing is running downhill, your fingers jerking behind you on the keyboard the way your legs do when they can’t quite keep up with gravity.”

Readers will forgive the perfectionism, however, since Ms. Rowell builds a cast of characters that is utterly credible and nuanced. There’s a bipolar dad, an absent mom, a plagiaristic writing seminar partner, a snarky yet ultimately loveable roommate, and eventually Levi, the quirky farm boy turned love interest. Early on in the book, Cath tells her writing partner “I love love stories.” Ms. Rowell does too—each of her three published novels features one. But in Fangirl neither the reader nor Cath sees it coming.

Cath herself is the ultimate in flawed, likeable characters. Unapologetically nerdy, she can’t help overanalyzing everything, even while making out with her boyfriend for the first time. “Kissed. Cath loved that word. She used it sparingly in her fic, just because it felt so powerful. It felt like kissing to say it. Well done, English language.”

At the heart of the book is a gutsy battle between intellectual judgment and following your heart. As with all good endings, ultimately Cath doesn’t have to pick a winner. With the right people in her life and the proper battles chosen and won, she finds it isn’t necessary to choose.