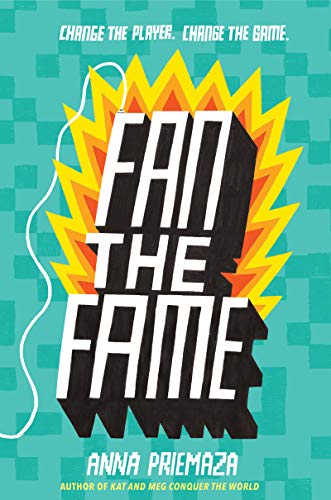 “Fan the Fame is smart, fun, and touching. Priemaza’s characters come to life on the page, tug the reader’s heartstrings, and uncover both the dark side and the gentler, companionable side of the gaming world.”

“They’re calling the girl my brother Cody unceremoniously dumped a slut. It’s all over social media. I’m not even friends with her, and still it makes it onto my feed.”

Lainey is embarrassed, angry, and scared by her brother’s antics—only it’s five million times worse than usual because that’s how many subscribers her YouTuber brother—Codemeister—has. Those viewers have no idea what he’s like when he’s not on screen.

“’No plans tonight?’” [my Opa] asks as he settles into the chair across from me.

“I do have plans—I’m streaming Legends of the Stone at eight—but that’s not the sort of plan Opa means. I tried to explain streaming to him once—how I’m not just sitting alone at my computer playing a video game, and instead have viewers watching me, interacting with me—but he still thought it was an antisocial waste of time. I wonder if he’d feel differently if I had thousands of viewers instead of only a dozen or two at a time. Probably not.”

SamTheBrave wants just one thing—to talk to Codemeister at the gaming convention that weekend. If Codemeister will give him just one shout-out on his feed, Sam could gain more viewers than he ever could by himself. Sam, who struggles with a skin-picking disorder, isn’t used to going out in public, but is forcing himself to go, alone, into the world where real people will see him and judge him.

“[The dragonlord] gives a slow, shallow bow, then says, ‘And, uh, could I get your, uh, autograph?’

‘ShadowWillow.’ I correct him on reflex. He must be a Codemeister fan.”

Shadow is a gamer. She knows her stuff, can beat most people she plays, and has the fire to be successful. But she’s a girl in a guys’ world, and too often that means she’s seen as second rate, which means people won’t even call her Shadow, her name of choice, instead of Willow. A chance partnering with Codemeister at another convention sends her numbers up, and if she can just get connected with him for real this weekend, it could cement her standings in the gaming world.

So is Codemeister really this important? Unfortunately, the gaming world seems to revolve around him. At least, he believes it does.

But Lainey isn’t willing to let him hurt more people. SamTheBrave is determined to find another, kinder way. And Shadow isn’t sure she’s willing to sacrifice more than she already has. Does that mean Codemeister wins in the end? Or can a sister, a young streamer, and a bad-ass gamer come out the victors? And can they do it without anyone else getting hurt?

Fan the Fame is smart, fun, and touching. Priemaza’s characters come to life on the page, tug the reader’s heartstrings, and uncover both the dark side and the gentler, companionable side of the gaming world. Priemaza’s writing is witty and clean, and the story zips along at a quick pace. Highly recommended for anyone who enjoys gaming, clever prose, or just a fun, unpredictable story.