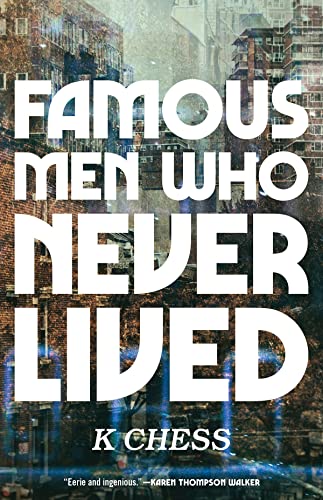 Famous Men Who Never Lived uses a classic science fiction trope (alternate universes) to explore the urgent question of what it means to be a refugee. Sixty million people in this world are on the move, out of their homes for reasons ranging from deep poverty to climate change and war. Those people will come to new cities and countries and try to build lives among people who are, at most, grudgingly willing to live beside them.

Migrants around the world are told to go back where they came from. The migrants in Famous Men Who Never Lived don’t have that option. They came to New York from an alternate time line in which nuclear terrorism destroyed their home; the gate closed behind them, and no new gate has appeared since. One hundred fifty-six thousand people, New Yorkers, now have to make lives in a version of America not quite like theirs, in which they feel progressively less at home.

The novel follows Hel and Vikram in their lives as Universally Displaced Persons (UDPs). By law, they must carry identification which marks them as UDPs and attend cultural integration classes every week, apparently forever. After two years “here,” what’s most clear to them is that their integration isn’t going particularly well. Vikram was a doctoral student in literature Before; now he’s a night watchman. Hel was a surgeon; now she’s unemployed and spiraling from the weight of unacknowledged grief.

Famous Men Who Never Lived goes beyond individual themes of grief and displacement. It takes on the complex idea of cultural loss. The lost world diverged from ours in 1909. More than a century of otherness existed, some of it terrible, some of it amazing. What would it mean to us to lose everything that the 20th century represented? Most of literature, virtually all of pop culture, music’s evolution into new genres and sounds. What would we be without hip hop, or jazz? What would we be without Ray Bradbury?

Hel becomes obsessed with Ezra Sleight, a science fiction writer from her home timeline. Her mission is ostensibly to create a museum to UDP culture and experience, but her focus is much narrower. She looks for traces of Sleight’s life. In our world, he drowned in childhood. The house where he wrote his greatest novels is a hoarder’s haven. The painting which “should” hang in the boarding school he attended has vanished.

Hel’s increasingly frantic search for traces of another life makes a sharp contrast to Vikram’s increasing disinterest in the books to which he previously devoted his life. He makes new friends, explores the world. He takes on the massive project of cleaning out the hoarder house while Hel spirals into frantic stalking of museum curators. Her madness fractures their relationship. They lose each other.

Hel has lost everything: this is the misery below the surface of her mind. She came through the gate alone, because her son was with her ex-husband on the other side of the country when the world fell apart. Her son was ten, the same age that Ezra Sleight was at his untimely death in our world. She is haunted by one loss because of her inability to come to terms with the other.

This should be heavy handed, but K. Chess writes with such emotional dexterity that Hel’s focus becomes the reader’s focus. Her son lurks just out of view, never close enough to reveal the him as the source of his mother’s grief. Everyone who knows Hel knows what should be devastating her, but she lives in a world where everything that should be is not. Her world includes people who wear hooded sweatshirts but rarely hats. They prefer hardwood floors to carpets. They built airplanes instead of airships. They’ve profoundly damaged the climate, so that everyone who was saved might still die. What should be hardly seems to matter.

Famous Men Who Never Lived is subtle and powerful. It deftly straddles literary and science fiction, and shrugs off its hybridity. It resists Ready Player One’s reminder that “Everything not saved will be lost.” Rather, Famous Men suggests that loss is never absolute. Things saved are still lost, and loss can be mitigated. In its approach, in its thoughtfulness and style, Chess’ novel stands among the best works of hybrid SF.