Famous Father Girl: A Memoir of Growing Up Bernstein 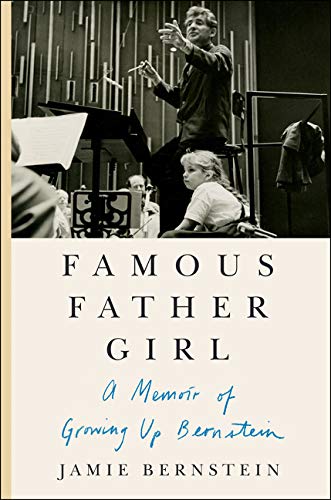 By all appearances, the Bernsteins were a loving family. There was Leonard (dubbed “LB” by many,) Felicia Montealegre (“Mummy” and Chilean-born actress who converted to Judaism,) and their three children, Jamie, Alexander, and Nina.

The mid-20th century brought fame and triumphs such as West Side Story and with that wealth that many simply dreamed about.

Their charmed life of music and celebrities was as natural as breathing air. The family lived for decades in the famed Dakota, overlooking Central Park. They had various summer homes over the years including in Fairfield, Connecticut, and at the Cape. It was the same Dakota where John Lennon was killed.

There were housekeepers and nannies from mother Felicia’s native Chile. The three Bernstein siblings grew up bilingual. Actually trilingual if you include “Rybernian”—a language created by Leonard and his two siblings, Burton (Uncle BB) and Shirley, when they were growing up in the twenties in Massachusetts.

Though Jamie was accepted into Radcliffe (then sister school to Harvard where her dad attended) she initially wanted to go to NYU just to remain in New York City. She later reconsidered and stuck with Harvard. Matter of fact, the three Bernstein children all went to Harvard. They were not slouches in the brains department; nor were their parents.

This charmed life with Lenny did have many warts. Things began to unravel in 1976 with his flop play, 1600 Pennsylvania Avenue, at which he worked so hard with Alan Jay Lerner.

As LB began to come out of the closet, Jamie felt he became quite the diva maestro, who had to have an adoring entourage surrounding him and running all aspects of his life in order to function.

Gay liaisons at one point tore Jamie’s parents’ marriage apart in the late seventies. Perhaps LB felt he could be exempt from hurting his family because millions idolized him. LB and Felicia temporarily separated in 1976.

Though Felicia was diagnosed with breast cancer in 1974, perhaps it was the stress and shame of her husband’s indiscretions that lowered her resistance to the disease.

At one point Felicia asked her two oldest children (Jamie and Alexander) to take sides against LB at family functions; however, Jamie’s “EST” (Erhard Seminars Training) made that request difficult for her to fulfill.

Perhaps to get her mind off of her marital crisis, Felicia took an acting job in Poor Murderer which seemed to refocus her energies. But she was diagnosed with a metastasis in 1977 and died in 1978. Lenny and Felicia reunited briefly before her death.

As kids, the Bernstein children grew up in an abundance of alcohol, pot, pills, and cocaine. Jamie wanted to be a singer/songwriter in the late seventies but was afraid of stealing the limelight from her famous dad. As she attempted to pursue her own musical career, Jamie always found herself in LB’s shadow.

Jamie said that Lenny was always critical of her musical endeavors—perhaps he thought it was in her best interest and that she might listen. But that was not how Jamie interpreted his criticisms.

As a liberal, socialist family, at one point the Bernsteins were ostracized for corroborating with the Black Panther Party in the seventies.

Promiscuity was a way of life for Jamie beginning in her senior year of high school when she lost her virginity. That seemed to be the sign of the feminist times. She slept around, bored with what she had when some new distraction came along. Isn’t this what her famous Daddy did once he came out?

Once Jamie had married David Thomas in the late eighties there were now “four kids” for LB. While the siblings worked with the maestro on a concert in Paris, Jamie said, “It was gratifying to have devised a way for all four of us ‘kids’ (including Jamie’s husband, David,) to express our love to our father, who’d become so difficult to love so much of the time.”

Toward the end of LB’s life he became increasingly addicted to drinking, pills to stay awake, and pills to sleep. Jamie provides us with sharp details of her remarkable dad’s decline, hiring and firing numerous Dr. Feelgoods, attempted withdrawals from drugs, and ultimately dealing with a diagnosis of lung cancer, leaving the reader sorrowful for the family.

Though Jamie had her children late in life (daughter Frankie in 1987 and son Evan in 1989) she was overjoyed that she was able to share them with her ailing father.

She continued her father’s legacy after he died in 1990, narrating concerts for children around the world—in Japan and Cuba in the form of “The Bernstein Beat.” Though the three Bernstein children may have fought off their father’s musical guidance over the years, insistence in piano lessons and other musical training, Jamie, Alexander, and Nina all ultimately became teachers of music in one capacity or another.

Throughout the book, LB’s unique way of loving his family was palpable through his near rib-cracking bear hugs and wet kisses. As an outlier genius he did the best he could in the emotions department.

Famous Father Girl: A Memoir of Growing up Bernstein by Jamie Bernstein is a delightful and often somber musical voyage through the life of the 20th century’s most prolific and controversial maestro and his accomplished family.