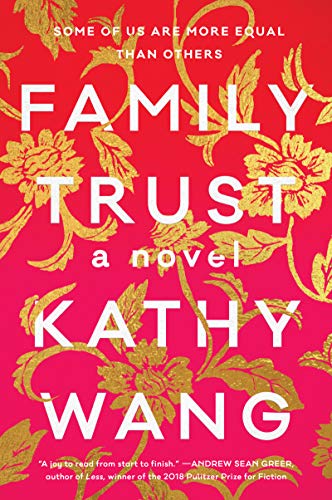 “Uneven as it is, Family Trust need not be compared to Crazy Rich Asians in order to find an audience. It has plenty to offer all on its own to make any holiday flight or train ride an enjoyable means of conveyance.”

The first stressor is revealed in the opening pages (and somewhat explored in the many, many pages that follow) of the story—the oncoming death of a parent.

On the bottom of page three, the words pancreatic cancer appear like a pointed gun, aimed directly at Stanley Huang, patriarch of an upscale Silicon Valley family. The news ripples through his family—ex-wife Linda, daughter Kate, son Ned and trophy second wife, the much younger Mary Whu—and each reacts, responds, and attempts to try and figure out just how much Stanley is worth and how large a percentage of that amount they can get their hands on.

To help fill the nearly 400 pages of narrative, other stressors appear—business tricks and treats, unfaithful husbands, irritable (and irritating) girlfriends, investment deals, and bad Chinese food made with too much oil—but a certain blandness overrides all. As we all learned to expect in early Jackie Collins novels, name brands are everywhere, and all the right people spend their money in all the right ways, and the world, at least through the filter of the high-tech industries of Silicon Valley, is filled with excess.

None of which suggests that Family Trust is a must-read.

But it appears that the publisher had another, very specific reason for publishing this book. And the publisher tips their hand all too clearly in their publicity materials:

“Struggling to fulfill their dying father’s final bequest, a privileged Chinese American family in Silicon Valley is forced to contend with the truth of their own lives in this clever and perceptive family drama that combines the warmth of The Net, the humor of Crazy Rich Asians, and the dark optimism of Behold the Dreamers.”

And yet, despite the publicity copy, Family Trust is not The Net. Nor is it Crazy Rich Asians or Behold the Dreamers.

What it is is yet another desire on the part of a publisher to jump on a gravy train that is already in motion. And, if Crazy Rich Asians’ publishing success and the even greater success of the film adaptation taught us anything, it is that fiction written by Asian authors is big right now.

Which makes the selection of this manuscript for publication feel a little icky. Vaguely racist. Which may be a fair complaint when filed again the publisher. But is it fair in any way when considering the author? No. No, it’s not. Kathy Wang has written solid, if well-timed novel, and had every reason to hope that it would find a publisher and publishing success.

So, was Family Trust worth publishing? Yes.

Is it worth reading? Yes again.

This is a perfectly pleasant read, even if, on page after page, in chapter after chapter, the reader feels as if he has read it all before.

At yet, author Kathy Wang, herself a product of Silicon Valley, by way of Harvard Business school (which features rather prominently in the text) and Berkley, has taken a deck of rather standard cards—characters, conflicts and locales—and shuffled them into a new order.

Plus Wang possesses a lovely turn of phrase and the ability to create sparks by rubbing her words together.

As here, when first wife Linda goes for a run:

“The lone other soul present was a heavyset blonde in a tracksuit, someone she recognized from the neighborhood. The woman was circling the track at a lumbering pace while noisily talking on her headset, one of those rude Americans who unapologetically occupied shared space as if it was her birthright. She was near Linda’s age (the hair was really more a stringy taupe) and appeared retired but Linda knew there was practically no chance of interaction. The woman likely didn’t even think she spoke English, regarding her as just another sexless Asian dotting her periphery, someone who could be ignored at will, like a houseplant. She had a surprisingly deep voice, a booming alto, and Linda’s own efficient gait meant that she circled twice for every oval the blonde completed.”

While there are problems with length (100 pages could have been cut and the work would have been improved), and pacing, and, especially with the author’s tendency toward weak and underwritten endings—especially when it comes to Stanley’s own ending—there are some treasures to be found as well. The surprise moments that hit hard. Moments of family violence. And moments of familial bonding.

Uneven as it is, Family Trust need not be compared to Crazy Rich Asians in order to find an audience. It has plenty to offer all on its own to make any holiday flight or train ride an enjoyable means of conveyance.