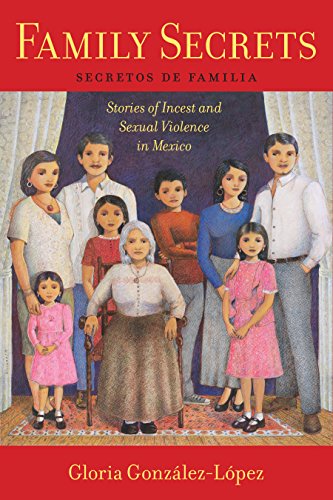 “Family Secrets resonates with authenticity, and makes us look deep within ourselves and our sanitized domestic histories . . .”

To most of us, “family” connotes a domestic group closely related by blood or marriage, sharing traditionally upheld moral and other core values passed on from generation to generation. It is the primary institution for the socialization of children, where we learn love, trust, loyalty, cooperation, and respect—the guidelines for socially sanctioned behavior.

In sharp contrast to this idealized picture of familial nurturing, Elisa says that her breasts stopped growing when her grandfather fondled them when she was a young girl. Helian’s father used his thumb to penetrate his son’s anus when the boy was only three years old and left him bleeding on the bathroom floor after full-scale rape at age eight. Renata’s oldest brother forced her to have sex with him when she was four and he was around 17. Samuel admits to engaging in sexual activity with his pre-teen stepdaughter.

These incidents of childhood and adolescent incest took place in Mexico, a patriarchal, religious society where such activities are easily hidden and rarely discussed in a sociocultural milieu where girls are groomed to serve men, and gender nonconforming behaviors often justify sexual abuse.

But familial sexual violence is not unique to that country and is far more common throughout the world than we realize or admit. Family closets everywhere hold all kinds of skeletons, shrouded in a web of secrets condoned by a conspiracy of silence.

In Family Secrets: Stories of Incest and Sexual Violence in Mexico, sociologist Gloria González-López bravely tackles this highly sensitive subject by recounting life story narratives she obtained in 2005 and 2006 through in-depth interviews with 45 women and 15 men from four Mexican cities whose lives were indelibly stamped by their experiences of childhood incest. In addition, she provides insights gleaned from interviews with 35 social workers, human rights activists, psychiatric practitioners, and others in the caring professions.

Looking through a critical feminist lens, she backstages her clinical background as a couples and family therapist and spotlights an empathetic storytelling approach more emotionally in tune with the harrowing testimonies of her informants.

“Telling and writing the life stories as they were told to me, with painfully graphic details about their experiences, exposes their lived experiences as is, that is, without sanitizing them . . . They re-lived their pain with the purpose of sharing a story of life so that it could be told and thereby help others in similar circumstances.”

Inevitably, Family Secrets is an extremely difficult and personally challenging book to read. On almost every page, the reader is forced to discard illusions about the inviolability of childhood, and realize how little a child, especially a girl, can be worth. But this is an essential step in unpacking gender oppression and understanding why and how incest and other familial sexual abuse can occur with impunity and even continue from generation to generation.

Sexual violence within the Mexican family has been under-studied and under-theorized. In part, this is because girls and women have been conditioned to regard “service” to male family members as their lot in life and thus “normal” so rarely ask for help outside the family unit (whose members often deny any aberration). In addition, social researchers have been reluctant to attempt empirical work on such a culturally and affectively loaded topic.

These family secrets have to be brought out into the open before meaningful social reform can take place in a profoundly sexist and homophobic society such as Mexico, where gender relations are institutionalized in a complex interplay between the household unit, culture (religion in particular), and the state.

To begin with, there is considerable tension and contradiction around the concept of incest in Mexico with a huge schism between legal and political definitions and much regional variation. As a nation that became independent from Spain in 1821, Mexico created its laws while still dominated by Catholic Church which was innately patriarchal.

“Catholicism is central to understanding incest and sexual violence in Mexican families with regards to issues involving the social organization of silence, secrets, complicity, and the confessional; double standards of sexual morality, guilt, and informants’ interpretations of their experiences of abuse . . .”

The outcome of this legacy is that while many Mexican states today legally define incest as “a crime against the family,” in practice, it tends to get lost in legal classifications and is punished only indirectly, while sexual violence overall may be judged less severely than other crimes. “As recently as 1980, a man who stole a cow received a more severe legal punishment than a man who raped a woman.”

There is a long way to go before Mexico catches up with current international conventions on the treatment of women and children, though women and men finally became equal under the law in 1974 and various nongovernmental organizations and other advocates have made great strides toward providing assistance to the sexually abused.

In Family Secrets, Professor González-López builds a foundation for a feminist sociology of incestuous families in Mexico by teasing out the most common patterns within the variety of sexualized exchanges reported, from rape to voluntary sex, the gray areas in between, and suggesting analytical concepts.

For example, she identifies women who reported the daughter-father incestuous arrangement as conjugal daughters in sexual service to a father, in keeping with the socialization of girls to serve the men in their families (gendered servitude) paving the way to be sexual substitutes or supplements for their mothers.

Another common pattern of familial sexual violence is between sisters and their biological brothers and male cousins, exposing the cultural validation of patriarchal entitlement to access the sexualized bodies of female relatives. This is illustrated by popular sayings such as A la prima se le arrima (You can get physically/sexually close to your female cousin) and Asi son los muchachos, no les hagas caso (That’s the way young men are, ignore them). Uncles, especially maternal uncles, along with stepfathers and extended family members also appear as relatives with benefits.

All these behaviors are fostered by a pervasive culture which transcends poverty and social class, involving:

“the sexualization of the parental child, social codes of honor and verguenza (honor and shame), a father’s perception of the family as the symbolic hacienda, kinship reassignments, idealized incestuous norms of heterosexual lifestyles in popular culture, visible and underground patriarchies, internalized sexism within the family and society at large, patriarchal notions of the paterfamilias and sexual slavery, and cultural rituals of misogyny.”

In sum, the disturbing picture of domestic relations which emerges from Family Secrets is a far cry from our idealized image of family life as a refuge from the ugliness of the outside world. Nonetheless it is somehow congruent with the current wave of violence against Mexican women, along with the recent surge in drug-related brutality, both with the complicity of the government through its inaction.

Family Secrets resonates with authenticity, and makes us look deep within ourselves and our sanitized domestic histories to recover the forgotten whispers about “black sheep” which lurk in the recesses of memory in virtually every family, everywhere. Silence, in itself, is the most powerful form of abuse.