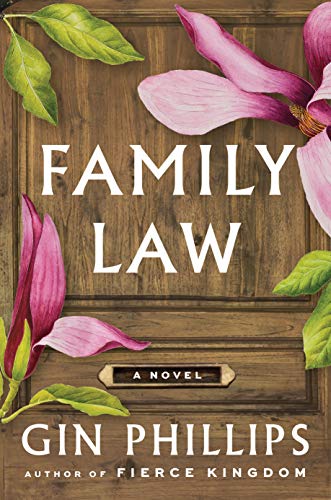 “Family Law is a compelling legal thriller told with a fresh take on Southern fiction.”

Lucia Gilbert has a private family law practice. A 1981 edition of The Journal newspaper in Montgomery, Alabama, interviews her for an article on the town’s Crisis Center for Law Day and writes of Lucia, “Before moving into private practice, she was the first woman to be appointed a deputy district attorney in the state of Alabama, first woman to substitute on the bench of the Montgomery County Criminal Court, and one of only two women in her class at Cumberland Law School.”

As a thirty-something, married female lawyer, Lucia is a rarity in the 1980s Deep South, and dedicates her practice to helping women and children in troubled relationships. When the indecisive Margaret Morris seeks Lucia’s counsel regarding whether she should end her marriage, her 13-year-old daughter Rachel is brought into Lucia’s sphere, and an unconventional relationship is set into play told from both Lucia and Rachel’s perspectives: the former in the third person, the latter in the first.

Although her mother doesn’t hire Lucia to represent her, Rachel is spellbound by the attorney and insinuates herself into Lucia’s life when she tracks her down and shows up at her house uninvited. Rachel says of Lucia, “She changed for me when I saw her in her house. Like when you pull a Barbie out of her box.”

On the differences between Lucia and her mother, Rachel remarks, “At home, everything was too hard or too worn down, too clean, or too grimy,” and, in comparison, “In Lucia’s house, everything made you want to touch it.” Lucia is the antithesis of Rachel’s nervous mother, who centers her life on appearances, doesn’t pump her own gas, and never drives at night. The teenager is fascinated by Lucia, and studying her fearless self-sufficiency, her role model characteristics intrigue the impressionable Rachel, who muses upon her own future and wonders, “Is this how you can be?”

Lucia knows well of her law practice’s unintended consequences, which has seen her as the recipient of various threats. On the day five gunshots are fired through her living room window, Rachel is there, and Lucia feels guilty for unwittingly permitting her to be in the line of fire.

What was once a blossoming mentorship relationship is immediately arrested when Rachel’s mother, now separated from Rachel’s father, forbids her to see Lucia. Rachel resents her mother and mourns over the enforced estrangement. Seeing similarities in her distant relationship with her father, Rachel says, “I thought of what Lucia once said about everyone having a need for conflict. I wondered if when he lived in the house with us, my father had filled my mother’s need for conflict.”

Lucia has no idea who fired the shots into her house, but suspects the shooter has something to do with her law practice. She reflects, “Divorce drove people crazy. When your family fell apart, it stripped you down to your most primal self, which is why divorce lawyers tended to get assaulted more than, say, real estate agents or intellectual property guys. How many people might hate her?”

With the absence of Rachel in Lucia’s life we learn, “Yes, Lucia missed her. Yes, she’d felt kinship and affection and she’d felt needed in some blurred way, as if she might be the answer to a question Rachel hadn’t asked. This tipped uncomfortably into the nursery rhyme of make a difference and have an impact and reach out and touch someone.”

Author Gin Phillips has penned a thoroughly realized, multilayered story depicting the meaning of family—those we are born to and those we create for ourselves. Family Law is set against the backdrop of early 1980s Alabama, and looks clearly at racism, gun control, marriage, and a woman’s place in the work force.

Family Law is a compelling legal thriller told with a fresh take on Southern fiction. In straightforward prose that elevates the shifting dynamic between Lucia and Rachel, the story unfolds the mystery of who shot at Lucia and ends with a climactic surprise.