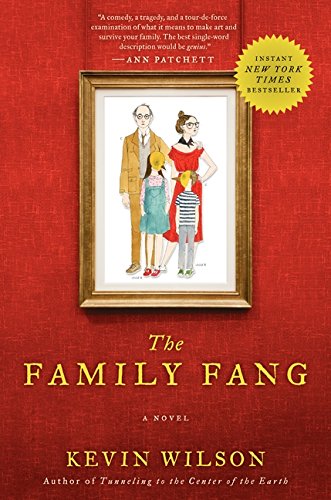 “The Family Fang is the sort of perfectly idiosyncratic thing that comes along only ever so often. . . . This book should succeed spectacularly. . . . But then there is the matter of the ending. . . . this could have been a book whose achievements stood above and beyond so many others. Nonetheless, The Family Fang is a very good book, a great read, and a hell of a good time.”

We proceed from a given: that Kevin Wilson, author of The Family Fang, is a man possessing amazing gifts. As a new writer appearing for the first time, Garp-like, on the literary horizon, Mr. Wilson shows himself to be more than capable of creating an intricate, loop-de-loop narrative. The Family Fang is based on a killer concept and populated with full bodied, meat-on-the-bone characterizations showcasing the author’s particular gift for presenting humor, in all its shapes, sizes, rhythms and hues. Author Wilson is also facile with the rest of the range of emotions and behaviors that might, by jurist, pharmacist or psychiatrist, be considered “human” on the two-dimensional playing field of the printed page.

What more can we ask from any one writer?

Perhaps, like an Olympic gymnast, after flying through the air, that he lands the thing solidly on both feet. But more on that later.

Kevin Wilson, the author of an earlier collection of short fiction called Tunneling to the Center of the Earth that gave an indication of these gifts, is a young author who has fully embraced today’s electronic media and the opportunities it has to offer. Along with his print work, he also hosts his own website, as, admittedly, many authors do. He hosts a blog as well, called Tunneling to the Center of the Earth. It was here on the blog on July 29th of this year that Mr. Wilson posted a picture of his naked, authorly (read: scrawny) left arm, upon which there is a new illustration.

About the illustration, Mr. Wilson posts: “This is slightly weird. I don't even let my closest friends see my bare feet or exposed knees. But I wanted to put up a picture of my latest tattoo, which is on my left arm, of Buster and Annie from the cover of The Family Fang. . . .

“I am hoping the book does not fail spectacularly or else I'll always have a reminder of it on my arm.”

While it is, yes, slightly weird for an author to tattoo himself with images from his own work, it is most certainly a fact that Mr. Wilson’s little reminder on his arm will be of a triumph and not of any sort of failure. The sort of thing that folks will be rubbing for luck in the future.

The Family Fang is the sort of perfectly idiosyncratic thing that comes along only ever so often, and that, when it shows up, cannot help but draw attention to itself because of its own glittery nature. It is a Julia Roberts of a book, one with a great big ravishing toothy grin on every page. One that laughs along with the reader—who is laughing plenty himself.

This book should succeed spectacularly.

The quotes that Mr. Wilson uses to fill that blank page before his book begins tells us ever so much. There is a quote from Dorothy B. Hughes, from her noir classic novel In A Lonely Place: “It wasn’t real, it was a stage set, a stagy stage set,” along with a fragment of William Meredith’s poem, “Parents.”

That poem says so much:

“It is grotesque how they go on
loving us. We go on loving them”

And yet, in the chosen passage, Wilson omits the bit that seems as if it were written for this text:

“They dandle us once too often,
these friends who become our enemies.”

Because both of these are at the heart of The Family Fang. Along with those stagy, stagy sets.

What follows is the story of a family in which the father, for the purposes of grant proposals and art installations, names his children “Child A” and “Child B” and yet names his camera “Carl.”

A story in which the first two sentences set the score:

“Mr. and Mrs. Fang called it art. Their children called it mischief.”

And so we go from there. This is, after all, a story about art. About its value and cost, its nature, and its place in culture, in the home, in the heart. A story of two performance artists, Caleb and Camille Fang, once professor and student years ago, then lovers, then, out of nowhere, parents, who decide that rather than let their children destroy their art—happenings that take place in public places, malls mostly about which we are told, “the strangeness they would create for such a brief moment that people would suspect it had only been a dream”—they would, instead, incorporate their children into it.

Annie and Buster (“Child A” and “Child B”) quickly and literally grow from being props in the artwork to being cognizant and willing participants, and, later, as they age, to less willing participants. In the opening pages, we meet Buster and Annie as young adults, both living and working on their own, each an artist in his/her own right.

Annie is an almost-famous actress. Buster, a failed writer, whose assignment to travel to Nebraska to interview “these four ex-soldiers who had been, for the past year, building and testing the most high-tech potato cannon ever seen,” only to accidentally receive a high-speed potato to the head, sets the plot in motion.

We are, along the way, given lengthy illustrations of the Fangs’ artwork. When reading of the Fangs’ 1985 art piece, “Lights, Camera, Action,” in which Camille Fang videotapes Caleb walking through the mall holding his infant son Buster in his arms, while flares hidden under Caleb’s clothing spark and burn, setting him on fire as he impassively walks—all this in order to record the discord this causes. It also reminds the reader that, just a quarter of a century ago, what today we would call terrorism was then still referred to as “art.”

Throughout this otherwise lively book, we read detailed accounts of many of the Fangs’ art pieces—too many, actually—with the novel’s structure of alternating a description of an artwork with the next chapter of text, the reader tends to face the end of a funny or moving chapter with the slightest sense of dread over the next handful of pages in which all forward motion will cease.

Indeed, it seems strange to the reader that a book that so celebrates art as traumatic, even terrorizing, as sloppy and fruitless and inevitable as life—that the author of such a book would feel the need for such a forced symmetry as he gives his book with this structure. The book comes to life fully through the actions and interplay of its four characters as they make the inadvertent art of living, it stops dead on the page when their instances of performance art are played out before us.

Like all the flashbacks, “flash-forwards,” and “flash-sideways” that cluttered up Lost, what begins as innovative here is tiresome by the ending. The author seems to sense this, in that, in the final part of the book, he allows plot to intrude into what had, heretofore, been sections dedicated to performance art. And for this the reader is thankful.

But then there is the matter of the ending.

After spending nearly 300 pages in which the reader often feels as if his brain were a hamster running full tilt on the little wheel in his cage, how shall the author then choose to end his story?

The reader has, to this point, been thoroughly convinced that art is all that matters, that art is, in every way that matters, inevitable, eternal, that it is the basis for love and the only thing that transcends love, that is more valuable and essential than love, and that love and art are the twin blades that will cut and rend us if we get too near. So what happens next?

Suffice to say that quite suddenly it has more to do with Entertainment than with Art.

Suffice to say that had Kevin Wilson just been a little more Caleb—and less Buster—in the end, had he dug deeper for the ending that might not satisfy the crowd on a Saturday evening (look for the film adaptation of The Family Fang to soon come to a cinema near you), that would satisfy that word Art, that would have been honest and true to the story of love and hate, of creating and destroying that he chose to tell—what really happens when you are hit in the head by a high-speed potato—and this could have been a book whose achievements stood above and beyond so many others.

Nonetheless, The Family Fang is a very good book, a great read, and a hell of a good time.