The Family Tree: A Lynching in Georgia, a Legacy of Secrets, and My Search for the Truth 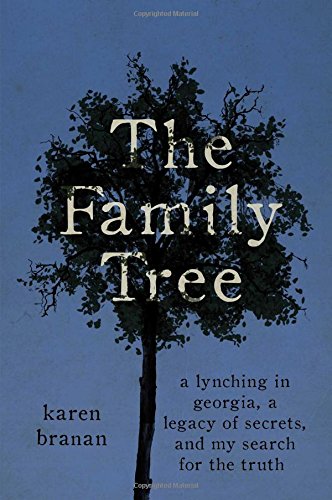 Enough books appear on individual race-hatred-based lynching in the South to constitute a genre. With such spectacular instances of societal murder as the Leo Frank hanging, the murder of the civil rights workers in Mississippi, and so many cases, most such vigilante homicides go unnoticed in history. It merits mentioning that such killings also happened in other parts of America with great frequency.

Journalist Karen Branan hears “her first whiff of knowledge about such a terrible event” from her grandmother. In Hamilton, Georgia, county seat of Harris County and some 80 miles southwest from Atlanta, on January 22, 1912, a mob hanged and then shot to death four African Americans, three men and a woman, after their arrest for suspicion of knowledge of the killing of Norman Hadley, the author’s distant cousin.

Hamilton, a small town even today, is in an area with a violent past, even by Georgia’s notably low standards. The infamous Phenix City, Alabama, is just across the Chattahoochee River.

Branan never found hard evidence on why the sheriff arrested the four victims or why a mob had them lynched. She writes that “no charges were ever brought against any [one] of the four.” It occurred in a community so conflicted and dysfunctional that the public believed rumors of African American conspiracies but then committed murder with a violent white conspiracy.

One of the virtues of The Family Tree is how the author weaves in family connections and so many related social elements such as illegal alcohol, gambling, murder, sex etc. The author describes public attitudes of the times as not monolithic. She interjects into the story how she investigated it.

Branan effectively fills the pages with basic details of the times but panders to public prejudices about the South. For example, she sarcastically writes about the Confederate veterans of Harris County: “lest the war be forgotten, the old soldiers—all former slave owners—had ramped up their celebrations and propaganda.” Almost all of these soldiers, however, were poor whites whose families had never owned slaves.

Encouraging such misunderstanding hides the real causes behind the Hamilton lynching, as well as to events in our own time. The chic view, common in 1912 and in the present, is to use symbols as explanations of real problems instead accurately portraying them as symptoms.

Nonetheless, The Family Tree can serve as a beginning of getting past over-simplifications as excuses for politics and violence even in our own time by examining its roots in the past.