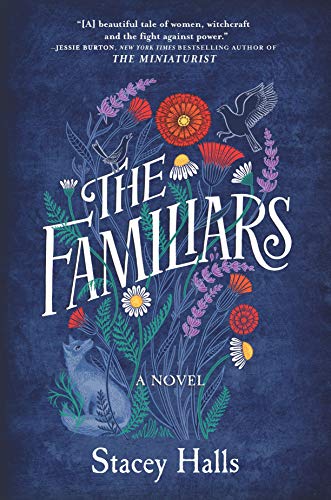 “A lovely book, a worthy debut novel, a satisfying read.”

Pendle Hill, England. A young woman, Fleetwood Shuttleworth, mistress of Gawthorpe Hall, is expecting again after three failed pregnancies and desperately wants to bring her child to term in health. If she can fulfill this expectation, she will not only please her beloved husband, she can continue to reign as mistress of her family estate. In the 17th century, for the upper classes, providing an heir was a woman’s work, and if she failed, she was practically useless.

Fleetwood loves her husband but begins to doubt him when she finds a note on his desk, written in the doctor’s hand: If your wife conceives again, she will die. This secret infuses Fleetwood’s journey as she approaches the day she will give birth. Did her husband see this note? If so, how long has he held this secret from her? Although Fleetwood is ill with morning sickness that seems to last the entire day, although her skin is yellow with jaundice, Richard is delighted with her pregnancy. And yet, he begins to sleep in another room.

It’s 1612 and from the first page, the novel trembles with the threat of talk against witches, suspicion, and fear. The reader, knowing from history the fate of so many people accused of witchcraft in the hysteria of the time, easily soaks up this fear. For locals of Pendle Hill and the countryside, dogs, foxes and other animals are rumored to be working as agents of the devil. They appear in frightening dreams, and locals invent stories about incidents that happen to them, padding them with their own terror. Fleetwood, who is not exceptionally pretty by her own analysis, finds a young woman named Alice, a local midwife, who is surrounded by mystery, and hires her to help bring her to term safely.

Soon, a family friend, Roger, begins to reveal his ambitions. In order to be in noticed by the king for future career appointments, his stokes the fears of devil worship and spreads gossip about the most vulnerable: the poorer witches and midwives. Meanwhile, the mysterious Alice works with herbs to bring Fleetwood back into health. Little by little, through Fleetwood’s sensitivity and small kindnesses (the disparity between their lives and their “class” is gaping), they begin to have faith in one another.

Alice warns Fleetwood about her husband: He’s not to be trusted. Fleetwood sees in his ledger that he’s spending money to supply Barton, Fleetwood’s empty ancestral home. She travels to the house on horseback and sees her husband around the fire in a cozy family scene with a woman who is also with child: He has a mistress!

Roger continues his campaign to vilify the women he’s already accused of witchcraft. He uses the child of one of the midwives to tell him what he wants to hear and build a case against them. The child comes from such a difficult life of poverty and she is so young, she is willing to say anything to continue being the indulged pet of Roger.

In the wake of her husband’s infidelity, Fleetwood flees her home at Gawthorpe and stays with her mother, refusing to return to Gawthorpe. As her day of delivery approaches, Fleetwood and her midwife fall into a trap laid by Roger; Alice is imprisoned and Fleetwood returned to Gawthorpe.  It’s seems almost impossible that in spite of her privilege, Fleetwood could do anything to save Alice —and herself—as she needs Alice at her birth. That is the stuff of the rest of the novel.

The characters are real from history, their names proof they lived and died, and the story comes from the imagination of the writer. It’s easy to read, and a delight to tumble into. Fleetwood is a strong protagonist, feisty and brave, generous and sensitive, and it’s pleasing to see the world through her eyes. Fleetwood’s observations and her dilemmas expose the patriarchal world that women had to navigate as well as the cruelty of poverty, the male abuse of power and privilege—without so much as a word about it. A lovely book, a worthy debut novel, a satisfying read.