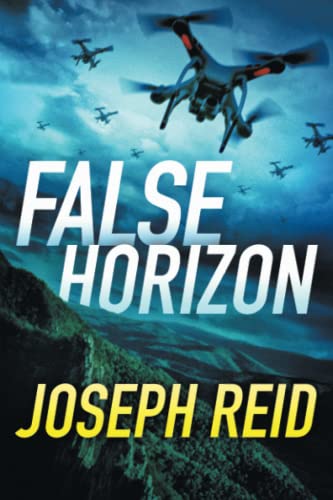 The aerial drones that have emerged in recent years are just like any new technology: a two-edged sword that can help or harm. In False Horizon, book two in the Seth Walker air marshal series, drones are sinister, and in the wrong hands have the potential to threaten the entire world.

Seth Walker is an electronics engineering genius who became an air marshal until his cover got blown. Then the marshal service made him Tactical Law Enforcement Liaison and Principal Investigator—another way of saying he gets the tricky and dangerous jobs.

In this case he’s called in to investigate why an unimportant commuter flight lost its wing and plummeted from the sky. It crashed in the mountains of West Virginia, right in the middle of a modern range war between ecoterrorists, frackers, miners, and drug smugglers.

Almost before Seth has started the investigation, he’s caught up in an attack by armed drones. This begins a body count that builds up very high during the book. The attack also leads him to the terrifying prospect of a large and complex drone protected by super-high-tech cloaking technology—a weapon so lethal and unstoppable it could tip the global balance of power.

But who besides the federal government has the capability of building such a thing, how did they get the funds, where are they developing it, and what is their motive?

Seth and his cronies spend the novel finding out.

In the breath-catching pauses between violence, we learn a lot about Seth and the opposing parties. While the latter are somewhat cliché, Seth is unique among contemporary crime/thriller heroes and more interesting than the villains.

His shaved head and tattoos make him physically unusual. He also has a weird mental defect: “My brain has this condition where, unless my adrenaline’s pumping, it needs to be constantly distracted; otherwise it’ll spin off in a thousand different directions. [My boss] hadn’t believed me about that until he’d forced me to demonstrate. After I’d collapsed into a drooling, twitching mess on his floor, he’d been pretty understanding.”

To manage this asset/defect, Seth always wears an earpiece connected to a player in his pocket that pumps “a steady stream of content—books, articles, podcasts, whatever text I’ve converted.” This keeps him current on information he needs to know, until it’s action time and his adrenaline ramps up and he must pop the earpiece or create a whole different problem.

His mental anomaly combined with advanced physical combat and shooting skills equip him superbly to be an action hero. At the same time, he’s an ordinary guy who does enough stupid things to make him believably human, and he has a moral code and humility that make him trustworthy and likable. He’s the kind of guy we’d all want on our side when the going gets tough.

What works about Seth’s character development in specific, and the novel in general, is how well the author presents backstory and foreshadowing. Without boring readers with info dumps—or, conversely, constantly teasing us with incomplete info and cliffhanger scene or chapter changes—he presents information that’s intriguing but not compelling at the time, preparing the ground for later drama. This provides plausibility and trust without diverting from a constant forward motion in the plot

The combination makes for a solid series we can look forward to following for many volumes. You don’t need to read book one (Takeoff) to follow the story in book two, though if you haven’t read it already, you might want to do so, and fully familiarize yourself for what’s to come.