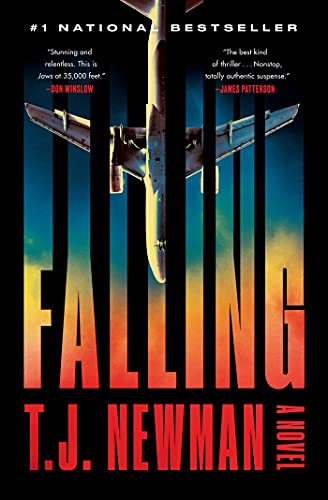 It’s uncommon for a debut novel to make a splash like this one: massive publicity campaign, huge advance, millions worth of foreign and film rights, laudatory reviews and testimonials from top names in the biz, top-quality hardcover printing—the works.

That puts a lot of pressure on the book to be a blockbuster.

And it’s certain to be one, as long as there are enough disaster-thriller lovers out there. For them Falling is a winner on all counts. First is the compelling premise: An airline pilot’s wife and two children are kidnapped and wrapped in explosives. He doesn’t learn about it until he’s in the air between L.A. and New York, responsible for 144 passengers. The kidnappers give him an impossible choice—to save his family, he must crash the plane.

They demand his silence, including not even telling the flight crew, and monitor his communications. He must decide and act entirely alone. He must also record a video that brings the kidnappers’ grievance to the world. At a specified point he must throw poison gas into the passenger compartment. As well, in case he manages to somehow trick them, the kidnappers have planted an ally onboard to execute “Plan B” while everyone is helpless at seven miles above the ground.

But the pilot, Captain Bill Hoffman, is made of the right stuff. “I’m not going to crash this plane and you’re not going to kill my family,” he promises.

Then he figures out a way to fulfill that vow.

Anything more qualifies as a spoiler. The questions “Do they get out of it? If so, how?” form the plot and suspense. Narrative style is brisk, as befits the genre, and viewpoint is spread across characters: Bill the pilot, his wife Carrie, the kidnappers, the copilot and flight crew, a key player in the FBI, and incidentals, such as the chief air traffic controller, whose importance arrives at a critical moment.

All characters are well fleshed-out and sympathetic. Even the villains are drawn in three dimensions, and their motives are relatable despite their abhorrent methods.

What drives the main characters to individual acts of reluctant heroism is an internalized profundity once expressed by Carrie’s father: “You don’t think everyone actually lives, do you? Most people just exist and roam around. It’s a choice, to actually live.”

So when choices of life or death are thrust upon them, the protagonists choose to live, if they can, despite a torrent of threats to their survival. Their ingenuity is impressive and brings a freshness to the thriller format. And the story feels plausible, because of how well the internal airplane scenes are conveyed. The author’s background as a career flight attendant gives an insider’s knowledge. It’s doubtful that someone lacking that knowledge would be able to dream up the ploys and actions onboard, around which the plot turns.

While this book might offer an original scenario, it suffers from predictability. People who read heavily in the thriller genre won’t be surprised very often, if at all, starting in the early pages. They also might sense a checklist behind the scenes, for plot points, character types, emotion prompts, and pacing.

This will likely divide the audience between readers who want to be swept away into the drama of the scenario, and those who are mainly interested in how the story plays out.

Either way, it will make a great movie.