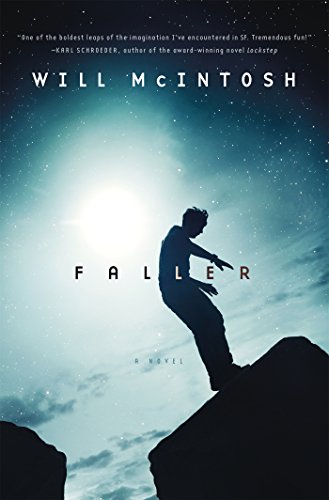 “Faller is exciting, refreshing, original as it can be, and action packed . . . It cannot be recommended enough.”

Simple fact: There are no original novels. Most ideas are rehashed from stories already told, adapted from previous ideas, plays on themes that others have explored. While Faller cannot be called original in its entirety, it is certainly the freshest idea to come onto the sci-fi scene in a long time.

Skipping back and forth from the Now to the Then, Faller tells the story of a man who has lost his memories, just like the rest of the world's population. He knows simple concepts and understands what objects are and how to survive; he knows what words are, but cannot read them; he knows a sense of self, but not his name or history.

With that mental fragility, he is plunged into a landscape that is not a landscape at all, but a fractured Earth made up of floating islands. Chunks of cities, farmland, malls, universities—all torn from a single planet and turned into their own isolated worlds, worlds low on resources and populated by amnesiacs, thus plunging each into a post-apocalyptic scramble for survival.

The man, hoping to survive by entertaining others with his wild idea of jumping off a skyscraper with only a handmade parachute, misjudges and ends up falling off his newfound island world instead, plunging for days in the wide open sky. This is when he takes a new name: Faller.

Thinking he is a dead man, he is surprised to find a new world fast coming up from below. Faller manages to fix his parachute, landing hard on the new world that is strikingly like Washington, DC, although he doesn't know it. This is when his sense of reality is tested and his journey truly begins.

A novel of hard science, but without the heavy techno-jargon that many of its kind have, Faller is exciting, refreshing, original as it can be, and action packed while also playing with deep concepts such as individual identity, bioethics, quantum mechanics, and the constant battle between doing great things for all or being great for one's own self.

Power, love, fear, conformity, desire are all themes that are perfectly woven into a novel that spirals ever downward toward an answer that may or may not be at the bottom. Faller is a novel that is hard to put down and will leave the reader questioning his own ideas of identity and self. It cannot be recommended enough. Enjoy.