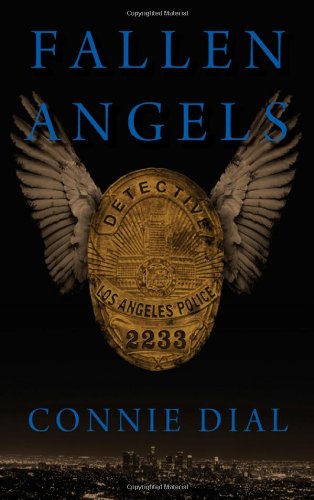 “While the story, like most crime novels, is focused on the who-done-it-and-how plotline, each scene has an emotional subtext that seeps into the reader’s heart and mind. It feels like we’re implanted in Josie’s head or riding around on her shoulder, getting an up close and personal view of life as a real captain of a real police force dealing with the dark side of human nature.”

Fallen Angels kind of sneaks up on you in a way that’s hard to define. It’s a straightforward police procedural with the Los Angeles Police Department Hollywood Division investigating a tricky case full of cop lore and excitement. And there is much less violence than one might expect—though plenty of corruption to keep things confusing and intriguing.

Ms. Dial writes with the authority that comes from 27 years on this police force, and she brings the viewpoint of both female cop and newly promoted captain to the story through the voice of her main character, Josie Corsino.

Josie gets stuck in the miserable position of not being able to trust her own officers when two related murders point toward involvement of her higher-ups, her staff—and her family.

Fortunately, two of her colleagues are reliable: a brilliant detective who drinks too much (and marries too often), and a fashion-model-gorgeous vice supervisor with a garbage mouth. This team digs out the truth from multiple sources while Josie dodges literal and political bullets.

As Ms. Dial puts it: “Every decision Josie made as the commanding officer of the Hollywood station was potentially explosive in a city full of unmarked special-interest landmines. The chief of police, police commission, her bureau, the diverse community, the ACLU, the officers and their union—all their needs and demands kept in perfect balance like a juggler spinning plates. Josie thrived on the work. Her marriage might be in a tailspin and her son a complete mystery to her, but she knew she was good at her job.”

Indeed, Josie is a careful, thinking person with clear priorities and boundaries. Yet she understands that some lines are fuzzy or flexible, and knows when to cross or hold firm. She can make hard decisions fast and accept the consequences. This gets her into trouble with darn near everybody and often leaves her standing alone.

Always conscious of her responsibilities as captain, she must in this case drop back to detective duty and do her own legwork, unofficially, because so many in her division are implicated in the deaths of a B-movie starlet turned junkie, and the starlet’s dubious agent.

Throughout the investigation, Josie remains aware of her moral and legal duties as a cop, at the cost of important relationships and possibly her career. Much of the story covers how her choices affect her colleagues and family, leaving the reader in suspense over how her life, as well as the case, will work out.

This is what gives Fallen Angels its insidious quality. While the story, like most crime novels, is focused on the who-done-it-and-how plotline, each scene has an emotional subtext that seeps into the reader’s heart and mind. It feels like we’re implanted in Josie’s head or riding around on her shoulder, getting an up close and personal view of life as a real captain of a real police force dealing with the dark side of human nature.

The “fallen angels” in this book are not just victims of the Hollywood star machine, but also Los Angeles police officers who have fallen from grace. Josie’s job is to root them out of the force and minimize the damage without getting killed or canned.

She must also keep good people out of danger. The way she holds up under the strain draws our respect and compassion. She lives the motto “protect and serve” with an understated heroism and sensibility that leave the reader hoping this book will be the first of a long series.