A Fall of Shadows: A Bess Ellyott Mystery 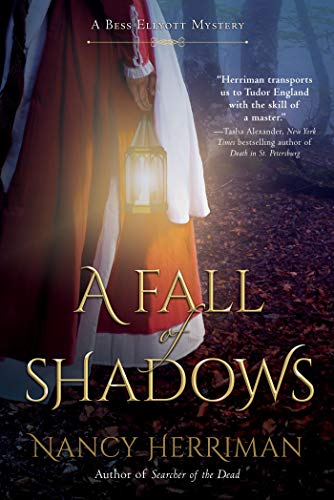 “A worthy read for those who love plot twists and Elizabethan history.”

A Fall of Shadows, the tightly woven second mystery novel by RWA Daphne du Maurier award-winning author Nancy Herriman, garners comparisons to the tone and atmosphere of Arthur Miller’s The Crucible in which threats of witchery abide.  The novel opens in October 1593 in Wiltshire, England. The plague has London in its clutches, and the populace of healer Bess Ellyott’s rural village blame the recent death of sheep on the practice of witchcraft.

Kit Harwoode, the reluctant constable, must conduct investigations pointed at a frail, aging widow named Mother Fletcher who “lived quietly, but not quietly enough for some, it seemed.” The villagers use superstition to guide their thinking; Kit Harwoode uses reason and logic. Thus Kit is hardly an ordinary man of his times.

Meanwhile, Bess Ellyott spies her deceased husband’s manservant Humphrey hanging crosses made from elder branches in the courtyard in order to guard his chickens from a witch’s curse. Soon after Bess is summoned to heal a dairymaid who has fallen ill at a neighboring property.

Her servant Joan surmises, “Sheep have died and now a girl in a nearby farm has fallen ill. . . . What or who might next be struck down?” Not long after Kit Harwoode attends the site of a murder scene: The playwright and actor from The Admiral’s Men is found dead, stabbed in the neck with a pen. The plot then gains momentum to encompass actors, other villagers, and farmers in the path to find the murderer.

Herriman creates an insular yet universal world filled with odd but historically probable characters—the evasive Jeffrey Poynard who has invited a Shakespearean troupe called The Admiral’s Men to perform in the village; Mother Fletcher, suspected of being a witch, whose cheeks were “withered and pale as paste, and her eyes red-rimmed and weepy”; and Anna Webb the dairymaid who lies deathly ill with stomach sickness as “a wood bucket, stinking from its contents, sat on the floor nearby.”

The novel weaves the small, historical specifics in with the larger scope of Kit’s and Bess’s findings as the story layers “sorrows upon sorrows.” A worthy read for those who love plot twists and Elizabethan history.