The Fall of the House of Wilde: Oscar Wilde and His Family 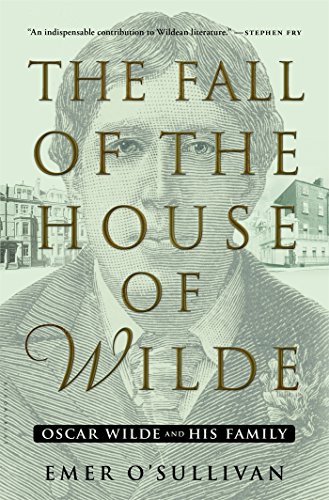 “Emer O’Sullivan’s The Fall of the House of Wilde: Oscar Wilde and His Family seems the Oscar. And isn’t that the greatest thing that any biographer can achieve?”

The Fall of the House of Wilde, Emer O’Sullivan’s terrific new biography of Oscar Wilde (and family), starts off by issuing something that may be seen as a promissory note:

“Biographies of Oscar Wilde typically treat him in isolation. He is seen as an outsize personality and everything tends to be reduced to personal terms. What gets overlooked is the vibrant and tumultuous milieu in which he grew up. Oscar was the son of two immense personalities who were at the centre of Irish society. More than most children, he was imbued with the loyalties and loathings of his parents, their politics, their erudition, their humour and, one might add, their predisposition to calamity.”

And it concludes with the sort of concluding statement that the reader, having arrived upon it, sighs with contentment and a sense of having been told a very, very good story:

“The Wildes inverted the American dream—they went from riches to rags. They belong to our century of celebrity, excess, laughter and scandal. Though the inhabitants of the house fell, the Wilde name survives. It stands for what is singular, independent-minded and fearless.”

Let’s start out by saying Emer O’Sullivan, throughout the entirety of the text, creates sentences of such complex opaline beauty that her book might just as rightly be categorized poetry as biography. And let’s agree that this work is an achievement in another way: It is very likely the finest of all the many biographies of Wilde. Indeed, it is among the best, if not the very best itself, of all the literary biographies brought into print in the last few years.

Of course, her first and best decision was in choosing Oscar Wilde, famous wit, cutting-edged fop, notorious homosexual, and author of such works as The Importance of Being Earnest and The Portrait of Dorian Gray, as her subject. No one was ever more outsized in talent, ego, and/or personality.

Except perhaps for his brother, Willie Wilde, who managed to slide from being an important London theater critic to becoming an exemplar of those Victorian gents who suffered from the condition known as “work shy,” the typical symptoms of which included lying about the house, not paying one’s bills, drinking copious amounts of whisky, and sighing.

Or their father, Sir William Wilde, once “appointed oculist to Queen Victoria,” who, becoming embroiled in an extramarital affair, also became the target of rape charges and the subject of a scandalous trial that presaged this son’s own.

Or their mother, Lady Jane Wilde, about whom other books should be written. Because she really shouldn’t have to share with her husband and sons. She was in turns a famous bluestocking, a leading Irish author, a social critic, and a visionary mother to her sons, allowing them to develop equally both the best and worst aspects of their personalities, and the spiritual mother to a generation of Irish poets, including William Butler Yeats.

That the father William and son Oscar both fall into scandal and ruin for sexual malfeasance (as well as a refusal to obey the class system that frowned upon their seeking relationships with members of the lower classes) combined with a sort of hubris of denial, and that all four descended into one form of poverty or another—Jane perhaps suffering in the greatest degree, as she lay dying, hoping that the son she had so doted on, Oscar, would come and rescue her—gives our author such a wealth of material that it would stagger a lesser writer.

But O’Sullivan rises to the occasion with scrupulous research, a keen organizational ability, a passion for her subjects and, most important, a rare gift for language.

As here, when she writes about such a simple thing—how baby Oscar got his name:

“Jane gave birth to a son on 16 October 1854. He was named Oscar Fingal O’Flahertie Wilde. Only O’Flahertie bears the trace of an ancestral ghost. It comes from the unruly Gaelic clan on William’s mother’s side, possibly a witty reference to the ancestral rebellious streak in this blatantly un-Anglo name. ‘Oscar’ and ‘Fingal’ derive from the Celtic mythology made famous by James Macpherson’s Ossian poems—Oscar is Fingal’s grandson, and son of the poet Ossian. Telling Hilson of the name they had chosen, Jane wrote, ‘Is not that grand, misty, Ossianic?’”

With these four oversized folk vying for the reader’s attention, The Fall of the House of Wilde (and please let it be made into a miniseries on Netflix) is an example of literary biography as page-turner. It is a book filled with exploits that make the reader’s eyes pop, and that leads to body aches, both from laughter and tears.

Somehow Emer O’Sullivan manages to make even the book’s exploration of the most familiar moment in Oscar Wilde’s life—his libel suit against the Marquis of Queensbury, father of Wilde’s homosexual lover, that ends up landing poor Oscar in prison and at hard labor, which caused him to quip, “If this is how Queen Victoria is going to treat her prisoners, then she doesn’t deserve to have any.”—seem new and exciting. As if filmed from a different angle or edited with more finesse. In her telling of it, the stakes are high and the tensions are real:

“Other names rolled out of Carson’s lips and Oscar was found to have given them all money and presents, receiving nothing in return but the pleasure of their company. Then Oscar made a slip of the tongue. Carson questioned Oscar about a youth named Walter Grainger, a sixteen-year-old waiter he had come across in Oxford.

“Carson: Did you ever kiss him?

“Oscar: Oh, dear not! He was a peculiarly plain boy.

“Carson jumped at this: Was that the reason you did not kiss him?

“Flustered and indignant, all Oscar could blurt out was, ‘Oh! Mr. Carson: You are pertinently insolent.”

“Carson persisted and Oscar was reported to be ‘nearing the verge of tears.’ He tried several answers but was unable to finish any of them. Carson kept up his monosyllabic bark, ‘Why? Why? Why did you add that?’ All Oscar could say was ‘you sting me and insult me and try to unnerve me—and at times one says things flippantly when one ought to speak more seriously.’ The damage was done.”

It seems likely an impossible thing to read this biography of these four mad fools (and poor Constance, the young beauty who marries Oscar Wilde and bears him two sons before becoming, as they say, The Last to Know) and not be moved by their suffering. Even though each has flaws large enough that you could wear them as an overcoat. Flaws so great that each seems to be enacting one of the Seven Deadly Sins, especially Willie, who gets Sloth down pat very early on.

It is perhaps Emer O’Sullivan’s greatest achievement that her characters come to life, bringing with them the world and culture in which they lived. She is generous with her details, putting her fingers down on many maps and tracing them for us, enlightening us about the politics of the day, and the way that the world seemed to those about whom she is writing.

In short, Emer O’Sullivan’s The Fall of the House of Wilde: Oscar Wilde and His Family seems the Oscar. And isn’t that the greatest thing that any biographer can achieve?