The Falcon's Eyes: A Novel of Eleanor of Aquitaine 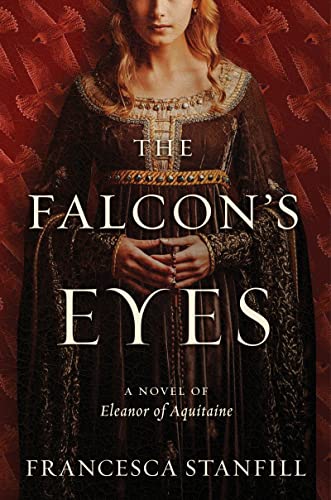 “a journey into the heart and longing of a spirited woman discovering her identity outside societal expectations, her search for personal freedom, her courageousness, and her empathy.”

The Falcon’s Eyes: A Novel of Eleanor of Aquitaine is an expansive historical novel that follows the life of an upper-class woman named Isabelle at the finish of the 12th century in England and France. The events of the 811-page novel take place in three settings: Chateau Ravinour, Fontevraud Abbey (in France), and Queen Elizabeth’s exiled court in England. The story unfolds generously in five parts and 110 chapters. Although it is subtitled “A NOVEL of Eleanor of Aquitaine,” there are numerous memorable characters, not the least of which is the notorious queen of the era, as well as noblemen and women, their servants, courtiers, falconers, nuns and messengers.

The story begins with the queen’s death in her eighties. Isabelle, whom we come to understand is a close confidante, sits alone in her chamber, the bronze falcon of the title beside her bed; in these moments the entire novel unfolds, with Isabelle at the center.

Her early life in her noble family of modest means takes place in her imaginative mind. She loves stories and the adventure of travel. But she’s attractive, intelligent, and somewhat feisty (“headstrong and disobedient” according to her mother), and by the time she’s in her mid-teens, she’s married off to a nobleman who is recently rich and titled. Isabelle’s “noble lineage” is very important to him. He has lost his beloved first wife and is now determined to have a son.

As Isabelle travels in a coach to her husband’s estate, we’re off into the life of a noblewoman in 1178. Prior to Isabelle’s wedding a midwife examines her to verify that she is ready for “the act of Venus.” And as the story progresses, we understand only too well what was expected of women. A pre-nuptial conference with her mother provides Isabelle with an unsurprising list: “You must learn to curb your tongue, be obedient and assume a gentler mien. . . . your first duty is to produce a child. The man you are to marry requires an heir. Do you understand, Isabelle?” But as expected, further details about the wedding night create only stammering and blushing with a reference to animals in the barnyard.

This chapter of Isabelle’s life is fascinating: her husband, Lord de Meurtaigne, is a reasonable number of years her senior, still an attractive thirty-something, charismatic man with a firm grip on his estate and household. Isabelle, aged 17—and the reader—observe him with an open curiosity: He can be exacting and short-tempered, but also kind, thoughtful, attentive—a savvy businessman, and to Isabelle’s delight, a satisfying lover. They share riding horses and Gerard’s obsession with hawking.

For a time the newlyweds are in love, as Isabelle enjoys the lavish meals, the unfamiliar luxury of his estate and discovers the delightful aspects of Gerard’s mysterious personality. Gerard lavishes his young bride with new clothes and jewelry (described in fabulous detail by Francesca Stanfill), but he expects her to dress as if she is on display and becomes very upset if she gets it wrong. Gradually, a picture emerges of a controlling husband who will tolerate no deviations from his requirements.

Isabelle becomes pregnant, but what should be joyful expectation takes on a dread as she fears Gerard’s wrath if she does not produce a boy. When her infant girl dies unexpectedly, Gerard indulges her sorrow for a while, but it’s clear she has to get on with it. The next time she bears a stillborn son. Heartbroken again and in grief, Isabelle takes great risks to make sure she doesn’t conceive again. As Gerard continues his worldly dealings and social-ladder-climbing, Isabelle consults the midwife in the forest for tinctures and spells to render her infertile. At this time the couple’s marriage holds all the tension of the expectations and pressures Isabelle must endure as they fail to produce a pregnancy. Ultimately, Lord de Meurtaigne discards her so he can procure a new, presumably fertile wife.

This relationship with Gerard follows Isabelle throughout the novel, even as she goes to live at Fontevraud Abbey, even as she flees to England to become a companion to Eleanor of Aquitaine. His cruel and unpredictable threat looms to the last page, serving as the long arm of gender norms that kept women subservient to men for centuries.

The story glitters with relevant detail at every opportunity, and it’s a reader’s delight to look and see the colors, the fabrics, the textures; to hear the sounds, to smell the fragrance and even the stench of life at the turn of the 12th century.

The story sustains interest throughout the turning of so many pages due to the practically perfect storytelling of Francesca Stanfill; the thick tome provides the unique joy of immersion into a rich world that seemingly never ends. If there is any repetition, it is only because of the limits of the reality of lives lived during that time in the social class that Isabelle occupied. Every announcement comes delivered by a courier on horseback who must be accommodated for the night as Isabelle takes the evening to write a reply and send him back over hill and dale in the morning. The arrival of horses pulling carriages, the two-week-old gossip that someone has died in another country, the departure of the entourage of a noblewoman who visits, the sitting in chamber staring out the window, the strolling in the garden, the reading of books, the tedious embroidering—all these things happen again and again.

And yet, after all this, the story that emerges and captivates is a journey into the heart and longing of a spirited woman discovering her identity outside societal expectations, her search for personal freedom, her courageousness and her empathy. Although the stories within The Falcon’s Eyes are centuries old, the conflicts Isabelle endures and resolves are parallel with any she would have today.