On Faith: Lessons from an American Believer 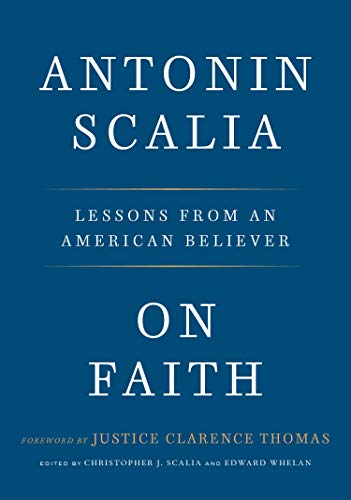 “On Faith is more than just a book about Justice Scalia’s faith and beliefs. It is a book not just for Catholics, Christians, and believers. All Americans who treasure our Constitution and the religious and other liberties it enshrines should read this book.”

The late Supreme Court Justice Antonin Scalia once startled a New York magazine reporter by expressing his belief in the devil. Many modern sophisticates and elites find it hard to reconcile intellectual brilliance with religious devotion. Scalia had both as evidenced by the speeches, opinions, and articles collected in On Faith: Lessons from an American Believer.

Justice Scalia, who served on the Court for nearly 30 years before his untimely death in February 2016, was best known for his “originalist” approach to interpreting the Constitution. In his view, the Constitution was not a “living document” that changes to accommodate modern attitudes and beliefs. Instead, it’s meaning must be understood as the Framers understood it and by the plain meaning of its words.

Judging by this book, he approached his Catholic faith in much the same manner. He was devoted to the traditions and rituals of the Catholic Church. He believed in the virgin birth of Christ and His death and resurrection. He preferred the Latin Mass, attended mass every Sunday and on holy days of obligation, participated in retreats, and received the sacrament of confession before receiving the eucharist. He was, in the words of his son Rev. Paul D. Scalia, “unapologetically Catholic.”

One of Justice Scalia’s heroes was Thomas More, the patron saint of lawyers, who suffered execution for refusing to acknowledge Henry VIII’s authority over the church. “More,” Scalia noted, “was unsupported by intelligent society” because he was “seeing not with the eyes of men, but with the eyes of faith.” More, he said, had the “courage to suffer the contempt of the sophisticated world.”

In speeches and in some of his dissenting opinions reproduced in the book, Justice Scalia decried what he called “the secularization of our national character.” The United States has “progressed,” he remarked, “from a Christian nation, to a religious nation, to a nation that has no preference between religion and irreligion.” This is especially true, he notes, among our intellectuals and “governing classes.”

The secularization of our national character, he repeatedly pointed out, runs counter to the history and traditions of the United States. America’s religious tradition, he noted, “consistently affirmed a national belief in God—but not a national belief in a particular religion.” “Religious faith,” he continued, “[is] central to our American political tradition.”

Scalia noted that Washington, Adams, Jefferson, Madison, Chief Justice John Marshall, and other founders of our republic repeatedly invoked God in speeches, proclamations, and at public events. The motto “In God We Trust” is on our coinage. Congress employs chaplains at public expense and opens each session with a prayer. Supreme Court sessions open with the prayer “God save the United States and this Honorable Court.” One of the Supreme Court opinions in the mid-20th century proclaimed that, “We are a religious people whose institutions presuppose a Supreme Being.”

That religious tradition, Scalia wrote, does not clash with the Constitution’s Establishment Clause, which in its original meaning prohibited the establishment of a state religion but did not mandate government neutrality between religion and irreligion. “[G]overnmental invocation of God,” he wrote in dissent in McCreary County v. ACLU, “is not an establishment.”

In one of the book’s most profound pieces—a speech Justice Scalia delivered to a gathering of American Catholics in Rome—he reflected on the importance of the separation of church and state to both the state and Christianity. It was Jesus, after all, who said “Render unto to God the things that are God’s and unto Caesar the things that are Caesar’s.”

“The business of the state,” Justice Scalia explained, “is not God’s business.” Christians should understand that the state “is not the Christian’s source of power, nor his means of salvation.” “In the last analysis,” he continued, “the most important objectives of human existence—goodness, virtue, godliness, salvation—are not achieved through the state; and those who seek them there are doomed to disappointment.”

All too often, Justice Scalia lamented, Christians have committed the “error of accommodating the Gospel to the secular ideology of the time.” This is what he called in another speech “the false allure of socialism,” which has led to “the expansion of the state accompanied by the contraction of the church”—what Father Richard John Neuhaus called the “naked public square.”

On Faith also includes testimonials to Scalia from family, friends, and former colleagues, including Associate Supreme Court Justice Clarence Thomas, who in a moving foreword to the book writes about their “shared Catholic faith . . . and sense of vocation.”

The book concludes with the homily delivered by Father Scalia at his father’s funeral mass. It was a homily devoted not to his father but to Christ. One senses that Justice Scalia would have heartily approved.

After all, one of Justice Scalia’s favorite prayers was composed by St. Thomas More while he was awaiting execution in the Tower of London. The prayer seeks God’s grace to put aside “worldly substance, friends, liberty, life and all, to set the loss at naught, for the winning of Christ.”