The Fair Society: The Science of Human Nature and the Pursuit of Social Justice 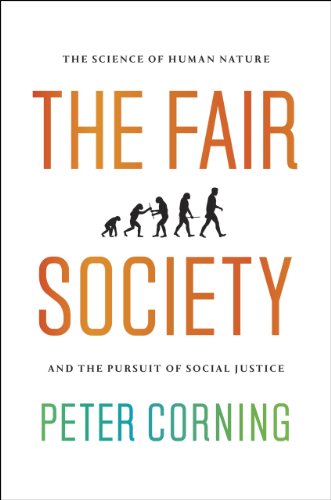 Peter Corning is outraged, and so should we all be. The United States has the largest income disparity in the industrialized world. Top executives have engaged in legalized looting. Business leaders on Wall Street, whose job was to assess and price risk, continue to give themselves outrageous rewards after having failed miserably at their jobs.

Well-rewarded failure threw our economy into chaos—and our neighbors into poverty. One quarter of the population is struggling to meet their basic needs, and in the year after the financial meltdown, one in six Americans experienced hunger because they lacked the resources to buy food. Sustenance, health care, and education are too often denied those without money.

Life is unfair. And to make it more fair, Peter Corning would like our society to adopt a biosocial contract. He is an eminent scholar who has had a full career at the intersection of the natural and social sciences. The Fair Society is a fascinating tour of political theory and sociobiology, setting the background for the biosocial contract he advocates. Those looking for a quick and insightful summary of the political, economic, and sociological theories that are relevant to the notion of fairness will find this book a valuable read.

There is an objective basis for agreement upon a fair society, Mr. Corning argues, and we are biologically hard-wired to understand it. As a result of evolution, humans either pass on certain social traits or they perish. These traits of fairness are based on equality (or equal shares), equity (in capitalist society, the idea that merit determines one’s wealth), and reciprocity.

Mr. Corning’s policy proposals come at the end of the book, after a very broad sweep of various literatures. He calls for full employment at decent wages and reforming the private sector so that it aligns more with the public good. (Stakeholder capitalism, which is not uncommon in Europe, distributes profits among a greater number of players than the American system of winner-takes-all, where only shareholders and the very top executives enjoy the fruits of a corporation’s labor.)

Mr. Corning’s third area for change is community governance: a public service element that fulfills the reciprocity element of fairness.

While Mr. Corning demonstrates a lifetime of learning in the scholarly summaries that build up to his last chapter of policy proposals, it might be a bit generous to call this book a structured argument. There are, after all, many theories of why and how we’ve come to have the intersubjective understandings that are often grouped as a social contract, and Mr. Corning does not really consider all of them.

But if we are to have a society that is based on some sociobiological understanding of humans, should we not give careful consideration to how the social contract comes about? Why is there unfairness in society, if fairness is a biological imperative? Why, for example, do European economies have the elements of fairness that Mr. Corning proposes, while the U.S. does not?

Is the implication that our country is about to go the way of the dodo? Understanding why the United States is so much less fair than the rest of the industrialized world would seem an important prerequisite to proposing change.

Although the book is not very rigorous academically (at least in the context of publication by a prestigious university press), one finds it easy to agree politically with Mr. Corning’s analysis and policy recommendations from very many schools of thought on society and its discontents.

He is right that we should have a more fair society, and his surveys of political thought educate us enough to understand why the basis of his arguments might be open to dispute. The Fair Society is a pleasure to read, a learning experience, and a heuristic for further thought on this important issue.