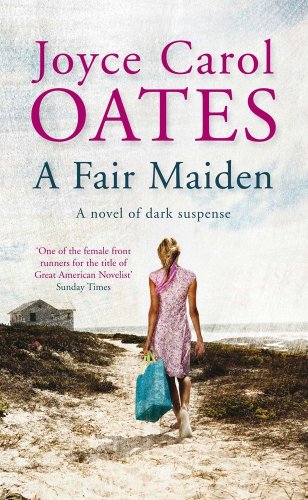 The prose of Joyce Carol Oates has long established her as a living national treasure. Like a handful of her contemporaries, such as Salman Rushdie, she hardly writes a paragraph that fails to leave an engaged reader breathless. Rushdie peaked early. His every book is a marvel, yet it seems he will never outdo the astounding Midnight’s Children.

Phillip Roth’s renaissance in his late years peaked with American Pastoral, amidst a burst of novels that overshadow his early work. And so with Oates, we wait to see if she can match the sublimely peeled onion of a sad novel, We Were the Mulvaneys. In Fair Maiden, she has not equaled that masterpiece —not by any measure other than the beauty of her language.

Fair Maiden seems conceived as a very specific literary exercise. The book is brief—longer than a novella, but still a mere one hundred sixty-five pages. And the concise telling is deliberate. Ms. Oates’ purpose appears to have been the creation of a fiction that is itself a prosaic tale that parallels a classic one that obsesses one of the two major characters who are each, as is Oates’ constant method, painted in layers on her pages.

Katya, Ms. Oates’ incarnation of a lower-class, ignorant teen who minds the children for an affluent couple summering at the New Jersey shore, has a chance meeting with the elderly Marcus Kidder, an immensely wealthy man fixed on involving Katya in a delusional fantasy he pathetically conceives as a life becoming art. It does not ring true. He lavishes Katya initially with pure kindness, praise of what he perceives as her fairytale beauty, while the author, characteristically, methodically unpeeling, reveals Katya to be an unfortunate cliché of “poor white trash.”

“For it was an earlier time, before Katya’s father had left, that she missed. She’d been only nine when he’d disappeared from their lives, and only vaguely could she remember Daddy lifting her in his arms, laughing at her frightened expression, calling her ‘Pretty Baby’ and kissing her, promising her he’d be back for her birthday, but worst of it was, Daddy had been so often away, returning and then leaving again, and it was a secret where Daddy was when he was gone —unless Katya’s mother blurted out in a drunken fury that Daddy was staying with another woman. . . .”

As always, Oates’ technique is in full bloom. But the two-dimensional Katya Oates assembles is only mildly sympathetic because she is trapped with the confines of caricature. As if on cruise control, the author has conceived her with a yawning predictability, supplying Katya with an unstable and needy sociopathic mother—partially depicted above—and a cousin with a malevolent violent streak that suggests an evildoer-of-the-week on an episode of television’s “Law and Order.”

We have met these people in popular media many times before. Groaningly completing the cliché, Kidder is, yes, a serious amateur painter, and his early preliminary intent is to paint Katya. He essentially invites her to his studio while stuffing her shallow pockets with cash.

At its best, Fair Maiden delivers sublime prose. Alas, there is not much else of worth to be found in the pages of this book. But even when Oates fails to deliver her best construct, even in dressing up an ultimately superficial examination of her characters with little more than her trademark lyrical prose, there is pleasure in the read.

For devotees who who can multitask—simultaneously reading Kant while gawking at Jerry Springer—both brilliance and inane, voyeuristic amusement are available. For this select group Fair Maiden will be a breezy read that incongruously requires a degree of engagement and thought amidst its broad predictability. And surely, once begun, this is a book of accidental literary pulp to which one easily returns.

We must await Oates’ next outing, hoping for a work that fully harnesses her distinct gift. Fair Maiden has its pleasures, but not the sort that are long remembered—certainly not indelibly and profoundly sketched like the haunting, unforgettable Mulvaneys.