Fail U.: The False Promise of Higher Education 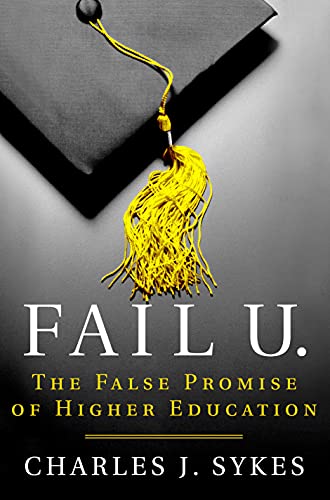 “For some families, sending a child to a private university now is like buying a BMW every year—and driving it off a cliff. If the education is financed by student loans, paying for college is like buying a Lamborghini on credit.”

Every year, in late spring, proud parents dressed in their best perch on uncomfortable folding chairs or bleachers attending university convocation ceremonies. They doze through droning laudatory speeches until they get to cheer their cap-and-gowned offspring for a fleeting moment as they cross the stage waving that hard-won diploma. The parents hug each other in relief, exclaiming something like “We did good.” But did they? Was it all worthwhile?

In Fail U.: The False Promise of Higher Education, Sykes paints a dismal picture of the American higher education bubble on the brink of bursting. The cost of a college degree has soared by a staggering 1,125% since 1978, student debt exceeds $1 trillion, and over 50% of college students are unemployed or underemployed as the street value of a bachelor’s degree has fallen way behind the price tag.

“For some families, sending a child to a private university now is like buying a BMW every year—and driving it off a cliff. If the education is financed by student loans, paying for college is like buying a Lamborghini on credit.”

Even worse, Sykes claims that there is precious little evidence that undergraduates actually learn anything at all, as universities and colleges rarely publish such information and employment records tends to confirm that new graduates often lack critical thinking skills as well as marketable certifications.

So who is at fault for this Catch 22 wherein parents and students still feel compelled to follow this traditional avenue to the middle-class professional union card, now little more than an expensive rite of passage often leading to indentured servitude in low-paid jobs that do not require a college degree?

As in a previous book, ProfScam, Sykes lays much of the blame on elite faculty—tenured professors who are allergic to actually teaching undergraduate students, preferring to earn their inflated salaries by researching esoterica which nobody ever reads.

He ridicules research topics such as potholders in popular art, the difference between pigeons and children, room geography, or the features of Mickey Mouse, while skewering jargon-laden “profspeak.”

Sykes implies that this flight from lowly undergraduate teaching via the privileging of research is the main reason that 76% of all classes are now taught by part-time, untenured faculty. He does admit that this is not all due to faculty disdain for the undergraduate:

“There were many parties responsible for this fiasco, and none of them should be let off the hook: the mediocre K-12 education that feeds unprepared students into college; administrators, trustees, legislatures, the federal government, and parents themselves.”

In addition to these widely covered issues around student debt and the increasing reliance on sessional instructors and teaching assistants, Sykes takes on contentious issues such as “rape culture,” microaggressions and classroom “trigger warnings,” part of the spreading Snowflake Rebellion: “the emotional and often melodramatic uprising of hypersensitive activists (the ‘snowflakes’) who demanded that colleges create ‘safe spaces’ by silencing viewpoints that made them uncomfortable.”

Sykes maintains that this climate of hyper political correctness fosters regimes of enforced sensitivity resulting in the stifling of critical thought and free debate—the antithesis of what the university should be all about.

Visiting speakers with unpopular messages can have their invitations revoked, course book lists might come with warnings that uncomfortable emotions might be sparked, faculty can be censured for correcting students’ grammar, the wording of memos must be scrutinized carefully to avoid offense.

“Like the speech codes and other policies, the trigger warnings and safe places fit in well on the modern campus because they draw their inspiration from the culture of victimization, where students are presumed to be either a member of an oppressed group or somehow damaged psychologically.”

In the same vein, the hysteria surround the “epidemic” of campus rapes has resulted in policies around sexual assault via codification of sexual consent and other bureaucratic procedures absurd enough to warrant a 1993 Saturday Night Live sketch. But this is no laughing matter as lives can easily be ruined by false or mistaken accusations and/or arbitrary processes applied by inexperienced university tribunals.

All these new policies contribute to the ballooning of university administrations already inflated by an explosion of institutes, centers, and other customized programs as well as accompanying edifice bloat. On top of this, major campuses today are expected to have top-flight facilities for key sports and state-of-the-art recreation centers, food courts, theaters, and you name it to lure better students.

Athletic programs and the various scams and scandals devised to ensure the eligibility to play of woefully unprepared “student athletes” are prime targets for Sykes’ skewers. As are several well-known academic hoaxes which raise some legitimate questions as to whether the emperor has any clothes in terms of the legitimacy of some purported “research.”

So what can be done to mitigate this sorry state of affairs wherein too many students pay too much and spend too long to get a college degree of little value in terms of employability?

Sykes suggests that in the future American higher education’s mantra should be “smaller, fewer, and less.” Smaller campuses and administrations, fewer students pursuing academics, and less spending per capita, while professors should be encouraged to spend more time with undergraduates.

Specifically, he sees promise in new forms of learning such as the Massive Open Online Courses (MOOCS) that will enable millions of students worldwide to obtain credit and degrees outside of traditional brick and mortar facilities. And, if first year courses can be completed online, then three-year degrees (at less cost) seem feasible.

Alternative forms of skill-based certifications would also help to break the college monopoly on bachelor’s degrees and be better tailored to employers’ needs.

In sum, Fail U stirs the higher education pot at a timely moment, raising a number of important issues for consideration by both academics and the general public. However, Sykes’ litany of complaints and strident tone can seem more like muck-raking than fact-finding. And the lens through which he views the academy appears distorted by his own biases. (Who knows a professor with only a seven hour a week workload? And does he truly discount supervising a doctoral student as skilled work?)

Lastly, Sykes largely ignores the overall political economic context to which the academy, like all other institutions under globalization, has had to adapt. Maybe his next book should be Corporate U, wherein he would be forced to examine the larger structural reasons for the proletarianization of the professoriate, the burgeoning of academic bureaucracies, and the prioritization of research.