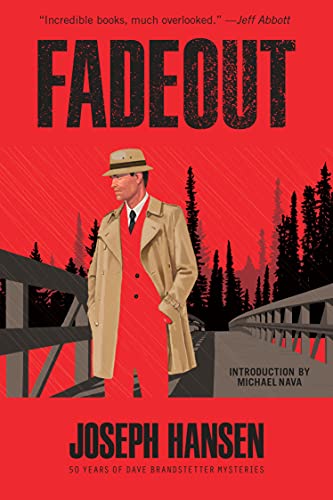 “Fadeout marks the debut of one of the 20th century’s most memorable investigators. With this re-issue, a new generation will experience both Hansen’s rich writing and taut plotting, and a compelling view of how life may have, in many ways, changed for the better.”

The Syndicate Books re-issue of Joseph Hansen’s 12 Dave Brandstetter crime novels begins with three titles at once, an excellent idea—because cracking open the first one, Fadeout, is an immediate reminder of why Hansen’s writing was startling and delectable in 1970. The Californian “death investigator” for an insurance company has much of the authority of a police officer to nose into questionable deaths, without having to focus on the law so intently. And he is, as publisher Paul Oliver says, “Tall, handsome, smart and successful.”

But author Michael Nava in his introduction to the re-issue nails the remarkable aspect of this neglected series: “Hansen is not only one of America’s best mystery writers, he is a great American writer. Period.” Nava asserts that the reason crime fiction readers don’t know Hansen’s books is their focus on the lives of gay men. Hansen’s investigator struggles with his committed relationship to another man, and all the cases he focuses on in this series involve men loving men.

They also include the brassy reality of gay nightclubs, paid sex, and vulgar drooling that objectifies both young men and older ones. But in each of the books, the motives for crime (and the pain Brandstetter feels) are always linked to love. A direction of love that was, at the time of writing, downright illegal and considered immoral and “sickening” by many.

Hansen’s writing steps away from those harsh edges through elegant description as well as page-turning plot and action. It also provides gorgeous examples of the Golden Age of American detective fiction, like this:

Or, of course, you could decide that killing someone else would ease your pain.

Fadeout opens with Brandstetter’s arrival in a box canyon above a California ranch town. An insured man’s car has been found in a dangerously flooded river, apparently accidentally landing there from a slick and risky wooden bridge. But no body has turned up. Should Brandstetter’s company pay out the life insurance benefit? Not if the man hasn’t died. And that’s what Dave Brandstetter must determine, through tracking down family, friends, recent activities, and yes, the course of love. All this, while he’s eye-deep in grief himself at the death (from cancer) of his 20-year partner and blaming himself for the small things he could have done better, the added love he could have displayed across years of tenderness and loyalty.

This kind of portrait of homosexual love turned preconceptions upside down when the books came out, of course, and for many, it still may.

When the break in the investigation arrives, it comes wrapped in the moody film ambience of the time: “A smoldering Valentino in white riding breeches ought to have been waiting in the motel office. It was a silent-movie set. Slot windows in deep white walls, guarded by grilles of black iron. Black carved beams, black chandelier. Floors of square red tiles. Tapestry-backed chairs with brass studs and gold fringe. But it wasn’t Valentino. It was Ito in a tidy white jacket.”

When this motel clerk pulls out a registration card and shares the information, Brandstetter is on his way to solving the case, although more risk and death follow. Neatly twisted and elegantly resolved, Fadeout marks the debut of one of the 20th century’s most memorable investigators. With this re-issue, a new generation will experience both Hansen’s rich writing and taut plotting, and a compelling view of how life may have, in many ways, changed for the better.