Facing the Wave: A Journey in the Wake of the Tsunami 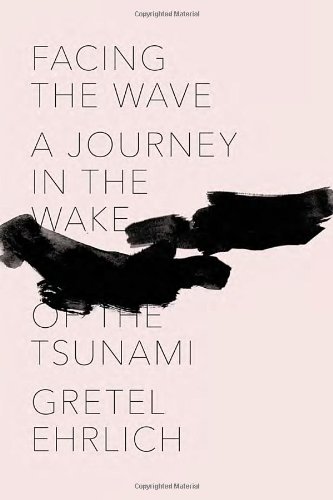 “Ms. Ehrlich’s book adds flesh and soul and spirit to the bare bones of news reporting, filling the void left by the media and reminding us that real people live behind the headlines.”

Anyone in the world with the ability to receive news surely heard about the March 2011 tsunami in Japan.

But afterward? Within a few weeks, the story fell out of the headlines to be replaced by the next disaster.

Meanwhile, the effects of the tsunami linger on in stories of endless heartbreak and mind-numbing devastation. Three months after the event, American writer Gretel Ehrlich went to Japan to see for herself what really happened and how people were faring, which she achieved by driving and hiking around the demolished coast.

She brings back a report of, yes, endless heartbreak and mind-numbing devastation. But she doesn’t do it in reporter-on-the-ground, newsflash-and-sound-bite style. Instead, deeply influenced by Oriental and Buddhist cultures in general and the Japanese culture in particular, she presents the situation in an Eastern style—nonlinear, poetic, fatalistic yet accepting, understated yet dramatic—sketching in calligraphic strokes a portrait of survivors whose land has been destroyed by tectonic forces throughout its history and who can expect it to happen again. And again.

Ms. Ehrlich organizes the her observations and impressions into three sections: three months, six months, and nine months after the Wave, during which she interviewed families and monks, farmers and fishermen, teachers and businesspeople, even an aging geisha who’s the last holder of a traditional song.

Each has a different story about the Wave, which Ms. Ehrlich gathers into a collage of survivor and eyewitness accounts sprinkled with testimony from people who simply came home to find their world gone.

Their stories are interspersed with poems or haikus, personal reflections, and brief factual essays about ocean dynamics, radioactive fallout, or government response to the disaster. Then the book returns to survivor tales, including guerilla animal rescuers who sneak into forbidden zones to save abandoned pets and livestock; or the woman who rented a backhoe and kept digging for months until she found her dead child, then couldn’t stop digging to find other lost bodies.

Ms. Erlich also shares blog entries by a fisherman whose life and business are forever changed and who gives us a rare look at what it’s like to be on the receiving end of international charity. She also recounts her own experience of the aftermath deprivations, the recurring quakes, the cold and snow, plus a typhoon that undid much of the recovery efforts.

Even though Ms. Ehrlich writes in first-person voice, her intent is to bear witness, not to feature her own adventures. Thus through her we hear from the Japanese, and we start to understand how people recover from disaster: one person, one day, one step at a time.

We see also how different religions influence choices and attitudes in response to a world torn asunder. Ms. Ehrlich’s book adds flesh and soul and spirit to the bare bones of news reporting, filling the void left by the media and reminding us that real people live behind the headlines.