The Fabric of Civilization: How Textiles Made the World 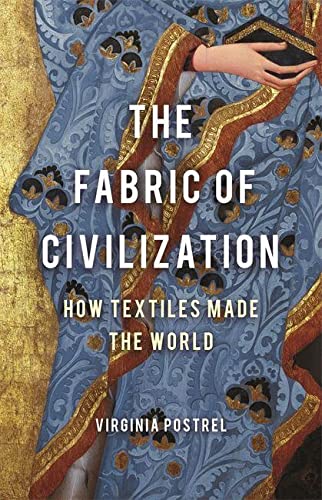 What is the foundation of civilization? The longtime answer has been the wheel. Other scholars claim that agriculture marks the beginning of civilization, or the domestication of animals. A few might assert that writing is essential. In The Fabric of Civilization, Virginia Postrel makes the compelling case that textiles are the crucial first element of any human culture.

Textiles aren’t separate from those other phenomena, of course, but they do predate them. Each element of textile production (fiber, thread, cloth, dye) requires human ingenuity, and most require basic mechanisms. Postrel points to spindle whorls as “among the earliest and most important human technologies— a simple machine as essential as agriculture in going from small amounts of string to the large quantities of yarn required for making cloth.” These stone wheels allowed humans to adapt found fibers (like wild cotton) and gather ones (like wool) into thread, allowing them to be knitted, twisted, or woven into usable materials.

Most crucial to Postrel’s argument is that this labor has historically been performed by women. Spinning has for millennia been women’s work: “Using a drop spindle, preindustrial spinners could work while minding children or tending flocks, gossiping or shopping, or waiting for a pot to boil. They could spin indoors or out, in company or alone, in close quarters or open space.” That these spinners are women is written into a wide range of historical texts.

The Fabric of Civilization is at its best laying out the deep history of textile production. It explores the global nature of textile history. Postrel consults evolutionary biologists for the history of cotton, which mutated into a usable fiber about a million years ago, and sometime not too long after that, migrated from Africa to Mexico, allowing separate strains to develop on separate continents. It’s a startling discovery for the untutored reader. Postrel briefly evokes the drifting of a seed on transoceanic winds to Mesoamerica, before returning to the genomics history of cotton, part of a larger narrative that presents scientists and researchers journalistically as colorful characters.

The shifting focus between narrative and journalistic consultation is the book’s weakness. The Fabric of Civilization is overtly a book written by a journalist rather than a subject expert. The journalistic approach means presenting whatever researcher was available for interview as a lone expert, instead of relying on a wider range of opinions or a real range of approaches to the topic. There are gaps that should belong to anthropology and archeology, and in spite of Postrell’s occasional nods to the first peoples of the Americas (whose cultures remain alive today), they remain anecdotes separate from the larger narrative she creates.

The book’s episodic accounts of historical developments are strong. The history of Italian lawyer Antonio Bassi’s early 19th century research into the infectious diseases of silkworks shows a remarkable moment of almost-discovery of germ theory decades before Pasteur. The invention of the spindle wheel, a crucial element in China’s silk production, offers real insights into how technologies develop at different times in different areas. Yet Andean spinners ultimately receive less attention than the textile-makers of Ancient Rome, and the east Asian silk trade vanishes behind the Italian and Spanish silk mills of the early Industrial revolution.

As a history, though, the book falls short. There’s a depth and balance missing from Postrel’s research, and a lack of complexity in her analysis. It undermines the later pages of each of her first chapters, and the later chapters of the book.

The penultimate chapter, “Innovators,” addresses recent creations in textile technologies with a kind of breathless, uncritical excitement. Postrel’s journalistic background comes out perhaps too strongly here. Rather than treating American corporate culture and its tie to textiles in any way problematic, the book offers sound-bite-ready accounts of corporations’ founders. The account of Under Armour’s history begins, “Kyle Blakely and his roommate were hungry. The North Carolina State freshmen had skipped breakfast to attend an early-morning college fair.” This kind of profile-oriented writing not only lacks of the focus of the earlier chapters, but ultimately undermines their credibility.

The Fabric of Civilization is a perfectly readable book. It’s well-crafted for a mass audience and likely to appeal to readers who enjoy nuggets of trivia, breezily packaged. If the book didn’t purport to be a real history, or to offer real scholarship, there might be less danger in it. The danger is one of over-simplification: in language, in approach, in grasp of complex issues, in attempts to represent global patterns in an authentic way.