Fables: The Wolf Among Us Vol. 1 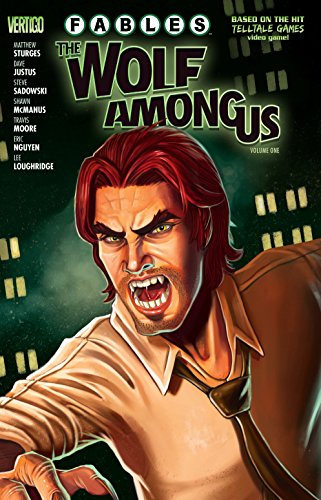 Fables: The Wolf Among Us Volume One is based on the bestselling video game by Telltale Games which was in turn based on the comic book series Fables. A prequel to creator Bill Willingham’s already legendary comic book series, Fables: The Wolf Among Us Volume One focuses on Bigby Wolf, the sheriff of Fabletown, a magically hidden neighborhood in New York City occupied and inhabited by legends and myths of the fairy tale worlds.

Forced to flee because of the Adversary, many of the most famous fairy tale characters have lived in the “mundane” world for centuries, forced to hide in a realm that many struggle to understand and cope with. That makes Bigby’s job a hard one when he has to deal with ogres, giants, frogs, ex-princes, current kings, men and women that used to be lords and ladies of the lands but are now forced to take up day jobs just like the rest of the mundane world.

Centered around the mysterious deaths of local prostitutes, Fables: The Wolf Among Us Volume One takes its mood and feel more from a Raymond Chandler novel than from the Brothers Grimm. A noir murder mystery that pulls back the layers bit by bit with each installment, the graphic novel is surprisingly deep considering that it is a prequel to an already well-known property. It could have just been a throwaway, but it holds its own with strong characters, a strong story, and a mysterious plot that only reveals enough to keep the reader going and guessing.

Not for the young, this is a mature tale that delves into the seedy lives of some of the most well known characters ever created. Snow White, Beauty and the Beast, Ichabod Crane, Mr. Toad, The Woodsman, Grendel, even Tweedle Dee and Tweedle Dum—all are involved. Bigby Wolf must navigate the politics of Fabletown while also coming up against resistance from residents and witnesses due to his less than friendly past back in the homelands. He was the Big Bad Wolf, after all. Not exactly popular then and certainly not popular now that he has a badge and the authority to make people’s lives tough.

But for Bigby, the trick isn’t coming up against the suspicious and distrustful natures of the Fabletown residents, but fighting his own nature. A big wolf likes to bite, but his teeth have been dulled since becoming the law. No longer can he huff and puff and break everything down. There are procedures, processes, rules to follow—all of which nearly drive Bigby insane.

But with the help of Snow White, who could be called his only friend, he pushes through and focuses on what really matters: finding the killer responsible for the rash of slayings. Prostitutes or not, Fables are Fables and it is Bigby’s job to find the killer and bring him to justice before he can take another head and another life.

Whether readers are familiar with the original series, and several spin-offs, or not, Fables: The Wolf Among Us Volume One is well worth a read. It gives readers a peek into the lives, now and then, of some of the most classic characters ever created while also putting them in a new, fresh, exciting setting and light.