Eyes on the Street: The Life of Jane Jacobs 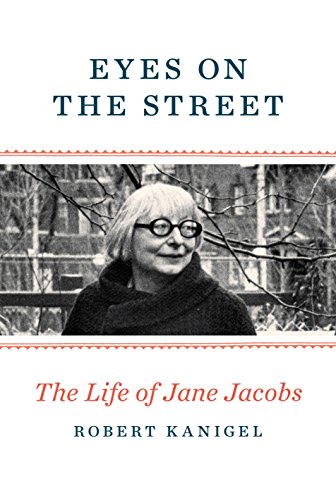 “They paved paradise and they put up a parking lot.”
—Joni Mitchell, 1970

Once upon a time, not all that long ago, modernist planners implemented draconian policies under the banner of urban renewal. They maintained that slums and decaying industrial sectors were eyesores fostering poverty and crime and must be razed to the ground. Squalid buildings were to be replaced by nicely landscaped housing projects, predicated on separate commercial, industrial, and residential sectors with inter-zone movement facilitated by a spider web of expressways.

Instead, Jacobs advocated selective renovation of rundown urban areas with continued dense mixed use on a pedestrian-friendly street scale, wherein a wide variety of business and services stimulated an ever-changing busy sidewalk “ballet.” These barometers of livability signaled healthy community interaction and plenty of “eyes on the street” to deter antisocial behavior.

Where planners saw inner-city blight, Jane Jacobs saw lively urban villages, each with its own distinct character, which together stamp the unique personality of a city.

Not only was Jane Jacobs successful in her specific goals of saving neighborhoods from demolition, preventing residents’ banishment to sterile suburbs or project towers and stopping expressway construction through downtown cores, she also triggered a major paradigm shift in urban sociology and planning.

Before Jane Jacobs, we viewed cities as a grand modernist canvas for erasing an outgrown past. After Jane Jacobs, we see a mosaic of living, breathing neighborhoods where the old is valued and people can satisfy many of their material and social needs within walking distance of their homes.

In Eyes on the Street: The Life of Jane Jacobs, award-winning biographer and science writer Robert Kanigel offers a first-rate in-depth appreciation of Jane Jacobs as one of the most influential intellectual figures of the 20th century.

More of a personal story than an intellectual history, Kanigel brings this extraordinary woman to life while showing how her ideas unfolded, so that even readers unfamiliar with Jacobs and her work gain insights into how a curious and tenacious mind transformed both the ways we look at cities and our strategies of community activism.

The biography is presented as a three-part narrative. An Uncredentialed Woman (1916–1934) grounds the story in Jacob’s somewhat unconventional childhood in Scranton, Pennsylvania in a family that valued independent study and an enquiring mind over compliance with formal educational and social norms.

The second section, In the Big World, follows Jacob’s rapid climb in New York City from secretarial stints and trade journal contributor to writer at the prestigious Architectural Forum at the same time as the ideas were gestating for her groundbreaking book The Death and Life of Great American Cities. While polishing this seminal work, she began her public campaign to save her beloved West Greenwich Village neighborhood from the Lower Manhattan Expressway Project.

“She stood up and spoke at public meetings. She wrote forceful, sometimes angry letters. She had friends spy on city authorities. She helped organize protests; once she managed to get arrested, and had four felony indictments thrown at her. Neighbors would come by for strategy sessions around her kitchen table, deciding on what facts and figures to gather, or how to maneuver some city official to come around.”

And most of the time, this apparently ordinary, somewhat dowdy and dumpy woman with owlish glasses, who rode to work across Manhattan on her bicycle, managed to defeat city hall, developers, and some of the most influential planning czars of her time.

Jacobs did not suffer fools gladly. Opponents who underestimated her quickly got their comeuppance. One time, Jacobs asked a sympathetic colleague why he had not stuck up for her more when a publisher questioned her reporting. Kanigel relates the colleague’s reply: “No need,” said he, “The poor man—the publisher—“thought he’d hit a buzz saw.” Jacobs was that quick and articulate in verbal jousting.

Kanigel cites another critic’s reaction to tangling with Jacobs. “What a dear, sweet grandmother she isn’t.”

Even in family and social gatherings, Jacobs invariable dominated the conversation, often with an arrogance stemming less from egotism or self-importance than from certainty of the logic of her reasoning. If you argued with Jacobs you wanted to be at your best.

“If there’s a flabbiness to your argument, a want of pointed example, a blurriness of vision, you probably wouldn’t want it to show. Because if it did—around the kitchen table at her home in Greenwich Village . . . or at a public meeting, or among a bunch of academics—she’d just gobble you up.”

Despite this intimidating façade, Jacobs had a very happy family life with her husband, architect Bob Jacobs, who admired her and deferred to her in most things. And, despite her eccentricities:

“Jane was perfectly normal, healthy and happy in all the important ways. She had friends who loved her . . . She took time out from her writing that was about the most important thing in the world to her to help her children, her friends, her neighbors. But always, she said what she thought; she didn’t know how not to.”

The third part of Kanigel’s biography, On Albany Avenue, deals with Jacobs’ life in Canada where she and her family relocated in 1968. Jacobs was a vocal opponent of the Vietnam War, and the family stole away secretly and headed north to save their two college-age sons from the draft or from jail for non-compliance. In Canada, Jacobs lived in a modest home near downtown Toronto until her death in 2006.

She continued her activist-intellectual work in her adopted county writing several more books on increasingly general themes, but none resonated with academics, planning practitioners and the public like The Death and Life of Great American Cities.

After several hundred pages of fast-paced and nuanced storytelling in a crisp prose style that engages the reader in an intimate portrait of the woman behind the urban visionary, this last section of Eyes on the Street seems to flag a little as if Kanigel’s view of his subject becomes a little fuzzy on foreign soil? Or perhaps it was Jacobs herself who had more difficulty following her path once removed from the American metropolis which fed her passion?

Nonetheless, this most complete biography of Jane Jacobs to date is a treat to read, as much for an appreciation of Kanigel’s own craftsmanship and his delight in his subject as for his keen insights into an original mind and tireless crusader for cities for people. Indeed, without Jane Jacobs’ terms like “livable city,” “mixed use,” “streetscape,” and “walkability” would not be standard in today’s urban lexicon.

In sum, Eyes on the Street leaves us not only with a yearning to be sitting around Jacobs’s kitchen table debating theories and strategies with the family, friends, and neighbors, but also with an urge to sit in a bar with Kanigel enjoying the repartee of a master storyteller. And that’s the true measure of a job well done.