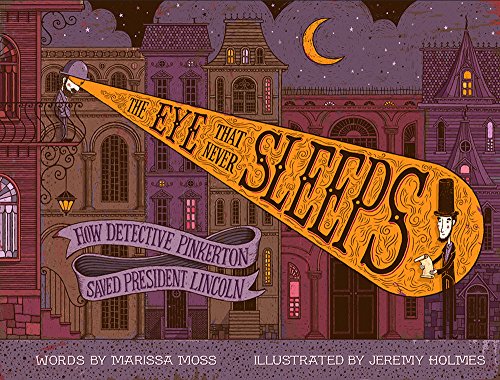 “This outstanding picture book invites multiple readings and will be a delight for aspiring detectives.”

Marissa Moss combines a compelling, yet little known, spy story with information about the early years of the famous Pinkerton Detective Agency and its founder, Allan Pinkerton, in this exceptional picture book.

In 1860, Pinkerton, a Scottish immigrant, was hired by the Philadelphia, Wilmington and Baltimore Railroad company to protect president-elect Lincoln on his train ride to the inauguration and ended up thwarting an assassination attempt by a secessionist. Thanks to Pinkerton’s diligence and ingenuity and his agents’ creative spy work, Lincoln arrived unscathed in Washington.

Jeremy Holmes’ engaging drawings show the master detective with a beam of light streaming from his (never-sleeping) eyes. Young reader-detectives have lots to investigate while studying the detailed illustrations, made with a digital scratchboard technique, some feature panels, and other full-size spreads with comic-style drawings in an attractive, muted color palette. Readers also learn about the “Pinkerton Method and Manual,” which helped to make the Pinkerton Detective Agency the most successful in the country by the 1850s.

In his note, the illustrator explains the use of period newspaper mastheads, and fashions and board games of the day to create an authentic look. The author’s endnote includes more biographical information about the famous detective.

This outstanding picture book invites multiple readings and will be a delight for aspiring detectives.