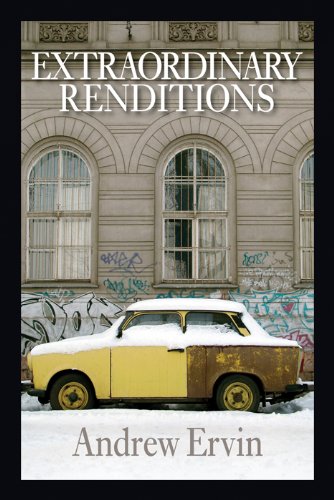 Andrew Ervin’s debut, Extraordinary Renditions, is a triptych of novellas set in contemporary Budapest, a city that straddles not only the Danube but also the old world/new world divide. Each of the three pieces features a main character confronting both personal and collective history; each pursues an uncertain path toward reconciliation between a former and future self. More than the sum of their parts, the collection offers an appropriately unsettling view of the wounds that can only partially be healed by time and perseverance.

At his best, Ervin writes with fluidity and authenticity about a place in which he himself lived for several years in the late 1990s, bracketed by his childhood and current residence in Philadelphia. In interviews he admits to the challenges of taking on the role of ventriloquist. Perhaps by choosing three distinct voices he has found a way to borrow and accumulate the perspectives of age and gender and race; the overlapping tales bring news of territory that is sometimes sharply outlined, sometimes vaguely sketched.

Extraordinary Renditions is most successful and compelling in the first and third novellas, the ones entitled “14 Bagatelles” and “The Empty Chairs.” In both of these pieces, the central actor is plausibly caught in a moment of near-triumph and near-disaster; actions are alternatingly motivated by need and fear. In the former, an aged concentration camp survivor who is now an internationally renowned composer returns to Budapest to celebrate the crowning moment of his career; for the first time he must acknowledge the extent of his losses as well as his gains. There are some poignant scenes in which Lajos Harkalyi exemplifies a survivor whose ghosts haunt him both waking and sleeping; yet at times the writing teeters on the edge of sentimentality and cliché.

In the last piece, an expatriate American violinist and her photographer girlfriend share a Budapest flat as they navigate a culture that both intoxicates and excludes them. Melanie, the primary character, is a member of the orchestra that performs Harkalyi’s world premiere, and experiences her own epiphany by way of music. Although Melanie’s insights are sensitively handled, there is a slight tendency here again toward the familiar rather than the original.

For readers who enjoy contemplating the role of disaffected American soldiers overseas, the middle novella will certainly appeal. Brutus, in “Brooking the Devil” provides a lens through which to view violence in and out of uniform, although its connection to the other two pieces seems rather forced.

Taken all together, however, the range and intensity of this book provide a welcome reminder that the world is a vast and complicated place, especially for those willing to explore its edges.