The Extraordinary Life of an Ordinary Man: A Memoir 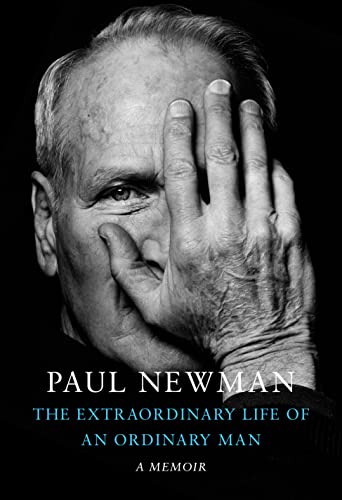 “Often sad, sometimes funny, and always absorbing, this unusually candid memoir will be a must-read for Newman fans.”

A gripping posthumous memoir from actor, director, father of six, philanthropist, and liberal political activist Newman, covering everything from his miserable childhood to his spectacular screen success. For five years (1986–91) the handsome movie star and his close friend, Stewart Stern, worked on an oral history, which gathered the honest views of the actor himself and family, friends, and co-workers, aimed at “explaining it all to my kids.”

The Extraordinary Life of an Ordinary Man, edited by David Rosenthal, begins in affluent Shaker Heights, a suburb of Cleveland, Ohio, where Newman grew up the shy, introspective son of a Jewish father, owner of a sporting-goods store, and an attractive and unpredictable mother, a Gentile, who “despised” her husband and family.

His mother routinely attacked Paul and his older brother with a hairbrush, then smothered them with love.

(Unless otherwise noted, direct quotes come from Newman’s own narrative.)

A small, underweight boy, Paul had a strong sense of “otherness,” believing his mother “wanted me to be a girl!” His “deeply unhappy” father, a nonpracticing Jew, hoped Paul would one day join the family business. He became “a secret drinker, an alcoholic.”

A mediocre student, Paul had little sense of direction.

After a stint in the Navy, he entered Kenyon College, where he established a “beer-chugging record.” At his mother’s encouragement, he pursued acting and received much attention for performances, which he dismissed. In fact, he hated acting. He considered establishing “Newman’s Laundry” at college his “real success.”

His entrepreneurial urge would emerge years later at “Newman’s Own,” his line of food products, whose profits he donated to charity.

After his 1949 graduation from Kenyon, he married Jackie Witt, a fellow drama student, “the first woman I could talk to,” and entered Yale Drama School over his father’s objections. Broke, he once modeled with a brassiere-clad woman for the cover of a detective magazine. He was paid $150 in cash—and glad to have it.

A few years later, a popular magazine asked women whose celebrity photo they used to have sexual fantasies and “abuse” themselves. The winner was Newman’s picture. He was in his thirtiess and “had been laid only twice.”

Before long, he enrolled at Lee Strasberg’s Actors Studio: “How, I still wonder, did I ever pass that audition?” he writes. “I was a pretty boy, a real conventional kid who somehow had staggered into this mélange.”

Then, still married to Jackie, Newman met actress Joanne Woodward. “Joanne made me feel sexy . . . we left a trail of lust all over the place.” They married in 1958 and stayed together for 50 years.

Most readers will agree that marrying Woodward was a saving grace in his life.

Newman attributed much of his success to luck, as when he was cast to replace James Dean as the lead in the movie Somebody Up There Likes Me after Dean’s death. And then there were his good looks—a recurring topic.

“You start feeling good about yourself—not just the way you look—and somebody says, ‘Oh, God, take off your sunglasses so I can see your baby blue eyes.’”

He recounts his politicking for liberal causes, his friendships with Gore Vidal and Elia Kazan, his passion for race-car driving, the fun of making so many notable movies from The Hustler to Butch Cassidy and the Sundance Kid, and his guilt over his son Scott’s death from a drug overdose.

Beneath it all, to the very end, runs his antipathy for his mother. “She represented all my leaden luggage, the parts of myself that I didn’t like,” he writes. “That sense of subservience, uncertainty, not know where the next attack was coming from or what the reason for it might be.”

He didn’t speak to his mother for a period of 15 years.

Tom Cruise and others recall Newman’s tendency to torture himself by drinking.

“Paul loved long saunas,” said comedian Mort Sahl. “We’d go into one, and he’d take a big brandy snifter and fill it with ice cubes and Scotch. He would tell me about his mother, and he would cry. She used to bait him. If there was anything bad in the newspapers about him—reviews, say—she’d clip and mail them to him just for torture.”

Often sad, sometimes funny, and always absorbing, this unusually candid memoir will be a must-read for Newman fans.