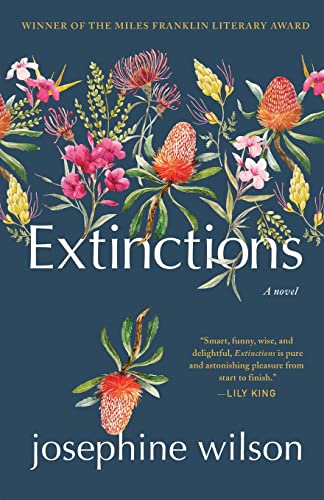 “a love song, not to certainty, but to possibility. Philosophical and thought-provoking, Extinctions will remain with you long after the last page.”

Frederick Lothian has experienced an extinction of sorts. His wife has died and his daughter has sold the family home and moved him into a village for senior citizens. An engineer by trade, he is used to solutions. But some problems cannot be solved. As he muses, “. . . for an engineer there was a bridge for every situation . . .” The knowledge that all the mistakes and regrets of the past can never be righted haunts Fred. He is slowly realizing that life and structural concrete do not behave the same way.

As we are invited into Fred’s thoughts via a stream of consciousness narrative, it becomes evident that Fred is not very likable. Unhappy with his new home, rather than downsize, he has brought everything with him, cramming it in to every corner of his villa and insisting on making it work.

Self-centered to a fault, he watches the world pass him by without much thought of anyone else. That is, until he meets his energetic, blunt neighbor, Jan, and suddenly something within Fred awakens. With her urging, Fred takes a break from wallowing in regret and does something for someone else, and with this action begins to open himself up to change.

On the other side of the world in London, Caroline, his adopted daughter, is also mourning the loss of her mother and family. She has exiled herself to a small basement flat where she works for a museum, collecting artifacts from what she calls, “the drama of extinction.”

Caroline is facing an extinction of her own. She wants a child, but at 37 this seems out of reach. Adopted, she feels disconnected from the world and has spent a lifetime trying to hide, trying to fit into a family in which she doesn’t look like anyone else. But, she understands that, “. . . resemblance was only part of it, without another to recognize her she had felt as if she had no weight in the world.” Denied her own identity and past, Caroline feels adrift.

As Jan, who is also adopted, describes it to Fred, “Being adopted, you’re the last of your kind—you know, the thylacine, and the dodo.” With the death of her adopted mother, Caroline can no longer manage to cram herself neatly into corners and force life to work. Like Fred, she is realizing that she must come to terms with her past in order to change her future.

A crisis with her brother brings Caroline home to Australia and into contact with Fred. As they each come to terms with what is extinct, the understanding and acceptance of what is forever gone, and the acceptance of loss, helps them to let go of who they used to be in order to become someone new.

Extinctions is not a linear novel with a clean beginning and an end. It is a tale of the evolutionary process—a reminder that change and adaptation are necessary for survival. It is an exploration of life, how we deal with loss, and how we find the courage to accept what we have experienced and decide these hurts are not the whole, but only part of the story.

Admittedly, the book drags at the beginning, but the difficult narrative is integral to what Josephine Wilson is trying to say. It is a tale of abuse and heartache, scars and loss, and how all of these things combine to create who we are as human beings. It is an examination of how we find the strength to face our past, with all its regrets and mistakes, and move forward.

Although Frederick and Caroline have both faced loss, in the end Extinctions is, ironically, not a book about endings, but rather new beginnings. It is not a typical story with a neat ending. Rather, it is a love song, not to certainty, but to possibility. Philosophical and thought-provoking, Extinctions will remain with you long after the last page.