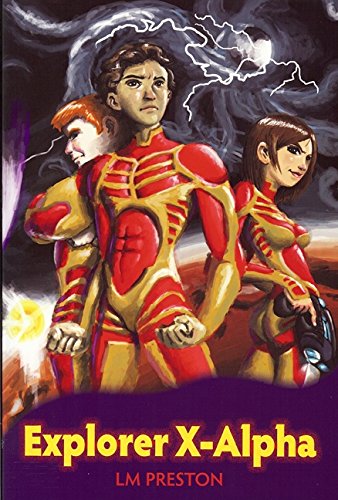 First time novelist L. M. Preston succeeds in writing a book boys will want to read. Not an easy task when 12-year-olds are more captivated by a flashing screen than a stationary page. But Explorer X-Alpha primes its audience for an action-filled look at space camp in the year 2080.

Aadi is the book’s title character. His team is comprised of Eirena (his potential love interest), Scott (his new best friend), Raiko (the petite martial artist), Dakota (the weapons expert), Damien (his arch rival), Carter (the tool with inside connections), Tacitus (the indestructible) and Ebu (his pet robot). The sponsor of the camp is the Technical Exploration and Genome Research Corporation (TERG), their parents’ employer. Little do they know that their parents willingly provided TERG with their DNA for experimental purposes. With their artificially enhanced births, they became company property.

Upon arrival at space camp, TERG issues an immunization against the alleged threat of intergalactic disease. However, some cadets fall seriously ill and are hidden in the bowels of the ship. Aadi and his crew uncover the conspiracy, but before they can expose TERG they are sent on a mission to Mars. Things go awry when a black hole unexpectedly appears. The spacecraft piloted by Aadi and Eirena ends up crashing on the distant planet of Shrenas.

Forced to cope in a hostile environment, Aadi and Eirena befriend a native named Jantik who draws them into the midst of a civil war. Their scientifically engineered DNA begins to transform their bodies as they begin to take on the physical characteristics of the planet’s inhabitants. Aadi grows a red reptilian skin while Eirena’s hair takes on gray and black stripes. As they struggle to hold onto their humanity, their bodies become infused with an innate power that they are able to unleash on command. As they fight to find a way home, Aadi worries if it is too late for Eirena who becomes enamored with her killing prowess.

Preston hits the mark in the first half of the book. When the cadets are together at space camp, their different personalities add life and dimension to the story. They are a realistically depicted group of adolescents who get on each other’s nerves more than they get along. They jostle to compete in simulated video games, for attention from the opposite sex, and to lead the camp’s mission to Mars.

The story veers off course when Aadi and Eirena get separated from the others. An entirely new plot line is introduced regarding the internal conflicts on Shrenas. This jars the book’s momentum at the halfway point. No mention is made of the other cadets until the final pages. The reader is left wondering what happened to them. It is unsettling to be left without a smoother transition.

The book is listed as suitable for children age 10 and above, but it is quite violent for those not yet in their teens. For example, to knock another out of simulation training, a cadet must issue a stunning blow to the head. When Eirena is captured on Shrenas, she is tortured quite graphically. Violence is viewed as a solution, and physical strength is relied upon more than ingenuity. Aadi does struggle to hold onto a moral code, but even he is forced to abandon his principles in the book’s culminating bloodbath.

Overall, young adult boys will fly through these pages at a hyper-accelerated speed.