This Explains Everything: Deep, Beautiful, and Elegant Theories of How the World Works 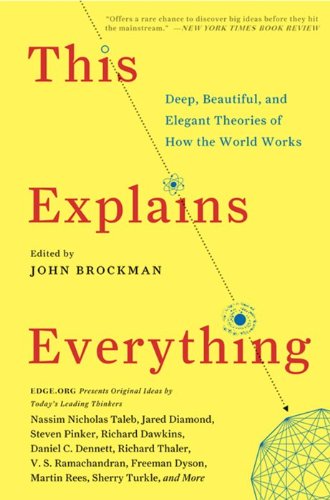 “The reader gets something new at each turn of the page.”

If you like to think, and you like your philosophy and science in small, cogent doses, this book delivers an intellectual mélange you can dip into and savor.

The title is a tad misleading, however. The book does not explain everything; rather, it offers explanations and theories for many phenomena across the humanities and sciences—150 essays by today’s top thinkers.

The essays are drawn from responses to Mr. Brockman’s annual Big Question posed on his online “salon,” Edge. As he explains in the Preface: “The ideas presented on Edge are speculative; they represent the frontiers in such areas as evolutionary biology, genetics, computer science, neurophysiology, psychology, cosmology, and physics. Emerging out of these contributions is a new natural philosophy, new ways of understanding physical systems, new ways of thinking that all question many of our basic assumptions.”

Thus within this context we get answers to the 2012 question: What is your favorite deep, elegant, or beautiful explanation?

The creativity and diversity of the replies is impressive and stimulating. (A bit mind-boggling, too, in some of the entries.) One contributor, cosmologist Max Tegmark, clarifies the question before tackling it: “[T]he hallmark of a deep explanation is that it answers more than you ask.”

That theme emerges often among the essays, along with a shared appreciation of simplicity that explains complexity. Certain names keep cropping up as well: Charles Darwin and Albert Einstein. Their respective work in evolution and physics has fueled much of what’s being explored today.

Among the essay writers, names aren’t so recognizable. All are prominent in their fields—or across several—but they are not household names. Except perhaps for Alan Alda (best known as Hawkeye Pierce in the award-winning television series M*A*S*H). His essay links Shakespeare’s Hamlet to big questions about the universe. The majority of the other essays have a more scientific bent.

The writers’ styles range from stiffly academic to vividly creative, including one poem. The longest essay runs a few pages; the shortest, one paragraph. They are loosely clustered by subject, but each one is mainly a fresh change from the one preceding. The reader gets something new at each turn of the page.

Although the subject range is broad, none of the answers deviate from the question. Some are deeper, more elegant, or beautiful than others, but: “‘Elegant’ is in the eye of the beholder,” writes Haim Harari, a theoretical physicist.

“Explanations tend to be at their most elegant when science distills the meanderings of philosophy into fact,” adds German editor Andrian Kreye.

These comments capture the essence of the collection. It’s ideal for keeping to hand on bedside or coffee table; for adding to one’s permanent library; and for contributing to discussion groups or classrooms—wherever big questions are welcome.