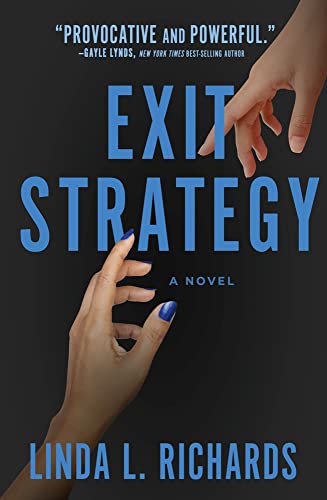 Although Exit Strategy is technically book 2 in a series, it is subtitled “A Novel”—implying that it stands alone. And it does. One does not need to have read book 1 to follow or understand book 2.

Of course it helps to have read the first one (Endings), but in a weird way it’s better to not know the full backstory of the unnamed assassin who’s yearning for an exit strategy from her life. All we need to understand for book 2 is that she’s a middle-aged woman who turned contract killer after losing her family and everything important to her. This information is provided in small bits that adequately set the stage.

At story opening, the assassin is wearying of the job. She is emotionally numb, stuck in physical and intellectual ennui. At intervals she eyeballs her firearm longingly to point it at herself. The only thing that stops her from taking that route is her dog. Being responsible for, caring for, and adored by an innocent, loyal animal keeps her connected to the remnants of her humanity. She manages to keep plodding one foot after another in vague hopes that a better plan might emerge.

That plan comes from her handler, the anonymous person who assigns her hits through coded text messages. This person recognizes her shift in mind, mood, and morality and removes her from the assignment list. Since she has earned so much money from her death-dealing career, and has built such a solid new identity, being retired offers no financial or logistical problems.

But it forces her to face the black hole of continued existence.

The same handler violates protocol by phoning her one day with a completely different assignment: keeping somebody alive instead of making them dead. That somebody proves to be the handler’s daughter, who is in danger but won’t take the threat seriously. The handler knows that the best person to find another killer and stop their mission is a killer who knows all the ropes.

Thus we get a killer-stalking-a-killer story, with the emotional and moral drivers being potential redemption for the heroine-assassin.

The fact it’s written in first-person present tense not only gives a sense of immediacy but also helps readers follow the main character’s internal transformation. While this story premise seems dark and depressing, there’s actually a continuous up-pull that ultimately becomes inspiring.

Neither the heroine nor the narrative wallows in darkness, unlike many noir suspense novels. The plot is an intellectual mystery: The heroine must figure out why somebody is trying to eliminate the person she’s charged to protect, and how they’re going to pull it off. Even though she starts in a bad emotional place, at regular intervals she advances a step further out of it as a result of the mental and physical challenges.

The stakes increase logically without the technique used in many modern crime novels of the author tightening the screws and making things even more nightmarish for the protagonist until the reader wants to scream. Instead, suspense is built into the scenario in a constant, electrical tension that compels one to turn pages but not gnaw fingernails.

The seamless prose is charged by nuance. In both narrative and dialogue, the heroine notices small changes of tone and shifts in body language shown by others, and she plans and questions her own words and actions, responding internally to her blunders and successes. She also switches back and forth between a deeply wounded emotional self and a cold intelligent self, which makes her credible because those shifts occur in appropriate circumstances rather than being manipulated to satisfy genre tropes.

A surprise-twist climax resolves the story and sets the stage for the series to continue. But back to the start: This book works as a stand-alone as well as an episode in a series. And it lays out thought-provoking moral issues to keep readers engaged throughout.