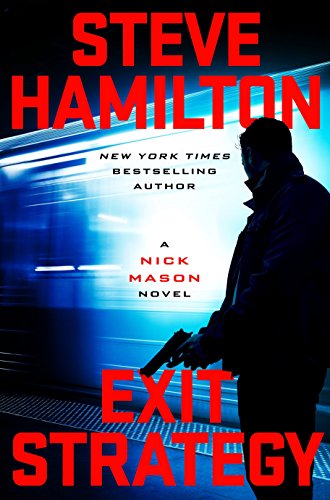 “an uncomplicated, entertaining thriller that’s easy to read and hard to put down.”

Nick Mason is a career criminal from Chicago’s South Side who leaves it all behind to settle down with his wife and young daughter—until a job he can’t refuse sends him to prison on a 25-to-life sentence.

When fellow inmate Darius Cole, still running his criminal empire while serving a double-life sentence inside, offers Nick a deal allowing him immediate release in exchange for becoming his problem solver on the outside, Nick takes it without hesitation. Thus begins the story of The Second Life of Nick Mason, Steve Hamilton’s highly-praised first entry in his Nick Mason series of crime thrillers.

Exit Strategy picks up where The Second Life leaves off, with Nick Mason living a life of “mobility, not freedom” on the outside while eliminating targets as Cole feeds them to him. When Cole embarks on a strategy that will see his convictions overturned, he assigns Nick to eliminate the two key witnesses who put him behind bars in the first place.

As fellow Cole employee Quintero continues his role as handler and facilitator of the hits—his duties including the surveillance of Nick’s ex-wife and daughter with orders to kill them if Nick fails to perform his missions—Nick desperately tries to put together an exit strategy that will get him out from under this double life that threatens to destroy everything and everyone he loves.

Steve Hamilton is the author of the New York Times bestselling Alex McKnight series and an Edgar and Shamus Award winner, demonstrating clearly that he’s perfected his craft as an author of high-powered, fast-paced crime thrillers. Exit Strategy is very easy to read, with a storyline that moves so quickly you instantly find yourself sucked into its slipstream and pulled along like a water-skier behind a low-flying rocket careening toward the finale. Before you know it, you’ve finished the book, and you’re wondering what hit you.

Reflecting afterward on the novel as a whole, however, the reader soon realizes that there’s an emptiness at the center of this book, a sense of something missing, because there’s an emptiness at the center of Nick Mason as a character. Although he pulls off Cole’s assignments while overcoming mind-boggling security obstacles, he seems incapable of defeating Cole’s hold on him, resigning himself to helpless servitude each time the phone rings and Quintero feeds him another target. He chafes at the risk he’s bringing to the lives of his ex-wife and daughter, but he continues to perform to Cole’s expectations just the same.

We never get much of a sense of the moral compass, if there is one, that informs his sensibilities as a human being and that might lift him above the stereotype of a two-dimensional, reluctant assassin. There are moments when he suppresses feelings of guilt at spending his time killing people, but these moments pass and we’re quickly back to the action.

For a second novel, now, he seems driven forward only by negative reinforcement—“obey or your loved ones will die.” This situation results in the underlying irony of the novel and the series to date—the plot moves with breakneck speed, but Nick Mason goes nowhere as a believable character.

Nevertheless, Exit Strategy is an uncomplicated, entertaining thriller that’s easy to read and hard to put down. At the end of the day, however, it comes up a little short, like an enticing cup of steaming espresso that’s all froth and nothing else.