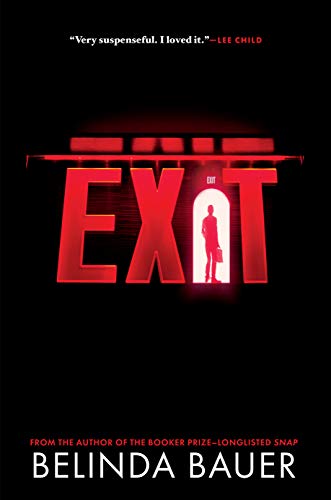 “Pick up Exit if you’d like to sample a very new way of building a crime novel with an unusual pace. It has something of Jasper Fforde in the compiled coincidences.”

The crimes embedded in Exit begin with an elderly man missing his deceased wife and son and making do with a relatively unpleasant dog, in an English setting where nothing much looks like improving. However, Felix Pink has at least found a volunteer task in his retirement that gives some meaning and emotion to his days: As an “Exiteer,” he assists terminally ill people who’ve become ready to commit suicide, in a neat and anonymous fashion that allows the relatives of the deceased to assume that a natural death has taken place.

When Felix’s usual partner in this kindly and quiet labor pulls out of the group and a young woman arrives instead, he’s willing to show her how things should go. Except that nothing goes as expected in the death they’ve been called to facilitate, and the wrong person seems to have died. Although Felix, in a panic, leaves the scene, his quietly conventional morality insists that he should turn himself in, make a confession of his role, and see it all tidied up. However, this too turns out to be an unreliable expectation:

“Until now Felix had been quite sure of one thing—that when he was arrested the police would believe his version of events, because the evidence would support it. That he’d only have to tell them the trust to make them understand how the tragedy had unfolded.

But what if his truth was wrong?

What if some bit of evidence he’d missed or forgotten supported another truth entirely?

Then, killing the wrong man and fleeing the scene of the crime might not sound understandable at all.

Both the British notes and the baffled protagonist develop something of the feel of Mole in Wind and the Willows: Felix has a very hard time developing insight, caution, and imagination as the pieces of a crime frame assemble around him. Bauer forces a methodical pace of events matched to Felix’s expectations of his hitherto ordinary life, while the buildup of complications among a handful of characters (including the police investigators) pushed the pieces closer and closer to revelation.

“The young woman [constable] was crouched down in front of Felix now, looking anxiously into his face. She reached up and gently touched the lump on his head. ‘Oh dear,’ she said. ‘What happened here?’

‘You should see the other guy,’ Felix whispered, and then he started to cry.”

Pick up Exit if you’d like to sample a very new way of building a crime novel with an unusual pace. It has something of Jasper Fforde in the compiled coincidences, and more of the relentless yet methodical pace of, say, Mario Giordano or Oliver Potzsch. There’s humor here, but it is very, very dry, alternating with tender—with the kind of protagonist who may eventually have to “blow his nose with happiness.”