The Exiles: A Novel 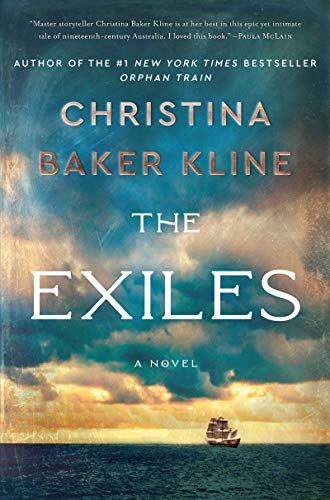 “You’ll open this novel because of history, read on because of story, and close it knowing more about your own life, right here, right now.”

Christina Baker Kline is at her best when she takes her reader on a journey. In The Exiles, she takes us to the era of British colonization, convict deportation, and the takeover of indigenous land in Australia and Tasmania. Along the way, we meet three main female characters: an indigenous girl, kidnapped from the family and home she loves; a naive English governess, impregnated by the man who proposes to then abandons her; and a midwife’s daughter labeled a thief for a crime she committed for her mother.

The writing is vivid, visual, real. And gut-wrenching. The plot twists will shock you.

Told through alternating points of view and locales, the novel moves from an upper class British household, to a dank prison cell, to a former slave (now convict) ship, to the shores of Van Diemen's Land (now Tasmania), and another prison. The journey allows the unlikely meeting and friendship of many different groups of women, first thrown together in a dungeon, then on a vessel called Madea bound for a penal colony, then as servants in the home where a kidnapped Aboriginal girl is held captive as a fanciful, cruel experiment.

This novel would be a page-turner if not filled with dark despair at almost every turn, if not its graphic depiction of the raping of land and women. The faint of heart or empathic may need breaks from the pain etched on nearly every page.

All the female characters are molested, raped, beaten, or tortured. What they hold dearest is stolen or killed. Mathinna, a native of the area, is torn from her homeland and "civilized," then abandoned on a whim. Evangeline is seduced, then accused of theft and murder, also abandoned by the man she thought loved her. Hazel’s mother is desperate perhaps but puts her daughter in danger’s way instead of herself, asking her to steal a silver spoon.

The novel begs the question: Have we women not all been imprisoned, even if we went willingly, or succumbed to the promise of a gilded cage in the name of love?

But Baker is saying love is key. Evangeline is a late pastor's daughter turned governess who falls in love with the wrong man. Hazel steals for her mother. Perhaps the most tragic character is Mathinna, who continues to love her family while trying to care about her captors. Yet all three of these women experience fleeting moments of beauty and wonder despite their plight. They continue to love even though love has betrayed them. The three find their redemption in love of a daughter, Ruby, who touches all their lives in some way.

"The bare canvas crawled with fleas. The floor was sticky. The room smelled of urine and blood and feces. When the door clanked shut, the women were in total darkness. Sitting on a moldy hammock, listening to the moans and coughs and sobs around her, Hazel thought only of Ruby, alone in the nursery. Was she wet? Was she crying? Hungry?"

Because these (and other secondary female) characters care, Ruby lives on.

Christina Baker Kline’s acknowledgements prove this novel may be her most well-researched, historically true publication to date. She's also a great storyteller who engages you with a character and place fully, making you love them, making it very difficult to lose them.

The author’s quest for complete authenticity will be evident to all readers of historical fiction. It’s amazing these characters are based on real women from this era who bequeathed today’s women freedom by their lives well lived at all costs.

Most women of the 1800s did not have any assurance of safety. Many died. The indigenous women of the South Pacific were all but wiped out by genocide. The Australian Aboriginals comprise only 3.3% of the population there today.

Baker’s women meet their destiny with courage and forbearance. Step by step on their life journeys, they leave tenuous breadcrumbs at first, then lay down a strong foundation for the women who follow them.

This is a novel for our times, and a novel that will stay with you. It's a perfect book club read. Save it for a time when you feel grounded, safe, but do read it.

Why? Because The Exiles teaches about the real women transported and deported on ships, the real Australian natives and settlers. Yet story wins over fact, adventure over grief. The author's ability to weave fact with fiction, tragedy with moments of hope, and the everyday with the universal will leave you immersed, wanting more. You’ll open this novel because of history, read on because of story, and close it knowing more about your own life, right here, right now. Realizing that moments of facing fear head-on lead to moments of the greatest ecstasy and empowerment, that our courage today means more than we could ever predict—to our daughters, and their daughters, to the future of the world.