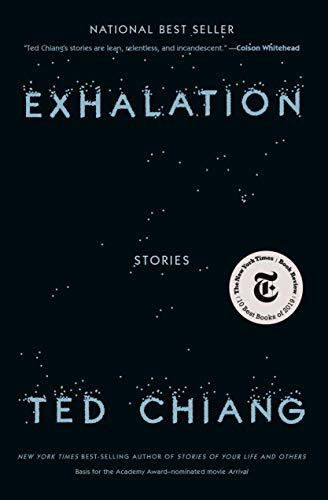 “If Jorge Luis Borges’ fables had deep human dimension, they would read like Chiang’s tales; Chiang’s writing deserves to be treated with equal respect and reverence.”

How is it possible that Exhalation is only Ted Chiang’s second book? Chiang’s stories are among the most complex and fascinating in modern science fiction, and each one creates a tremor when it first appears. Dedicated readers hunt his work, digging for brilliance in a print-saturated world. Perhaps once a year, one of his stories appears in this anthology, or on that website. Fans whisper to one another, announcing that a brilliant, fleeting Chiang tale has appeared in the science journal Nature, where it holds its own with the world’s most urgent knowledge.

That brief piece, “What’s Expected of Us,” reveals Chiang’s genius in small. Each of his stories, from microfiction to novella, is a thought experiment played out through human lives. By his standards, the Nature piece is short, and appears to be exactly what it claims: a warning. In the coming year, humans will buy an apparently harmless toy that ultimately, finally, proves for them the utter absence of free will. A tiny realization, but utterly destructive: “People used to speculate about a thought that destroys the thinker, some unspeakable Lovecraftian horror, or a Gödel sentence that crashes the human logical system.” In comparison, real belief in the absence of free will seems anodyne. Yet it destroys absolutely.

Any of Chiang’s stories could be filmed, and any would shine. His stories revolve around concepts, but each relies on fully-realized characters to give philosophical meditations urgent emotional life. Still, to film these stories would be to lose their depth. Chiang’s prose is liquid and seductive, and his emotional entanglements create subtle agony. His writing shows how crucial written fiction still is.

“The Lifecycle of Software Objects” is arguably the most moving story in the collection. A laid-off zookeeper is recruited to train and socialize “digients”: digital organisms that occupy social media platforms. The digients are impossibly endearing: “there’s a little anthropomorphic tiger cub sliding colored beads along a frame of wires; a panda bear examining a toy car; a cartoon version of a chimpanzee rolling a foam-rubber ball.” Bodiless and durable, they’re intended to be pets without physical needs, more ethical than animals that are too often adopted and discarded.

Most digients are played with for a few months, then abandoned to digital suspension, but the protagonist and other commited digient “parents” stay with their little entities for years, long after the company has collapsed, and even after the social media platform has been abandoned. The digients continue to learn and develop, though they retain their child-voices and sweetness.

At what point, then, might such entities become adults? If they cease to be pets and become children, surely they must become adults, but their “bodies” will not change. “The Lifecycle of Software Objects” balances questions about our ethical responsibilities to artificial intelligence with the emotional struggles of parenting. The story’s layers of unrequited romance and financial struggle cast an aura of “real life” that lifts the whole out of the realm of thought experiment and into the realm of family epic.

Chiang’s great talent is to lift each of his questions out of the realm of abstraction. His stories never lose their human quality, and each of his characters experiences an entire life, with love and loss, sometimes children, financial gain or loss, social struggle. If Jorge Luis Borges’ fables had deep human dimension, they would read like Chiang’s tales; Chiang’s writing deserves to be treated with equal respect and reverence.